The Fallen by Jassy Mackenzie 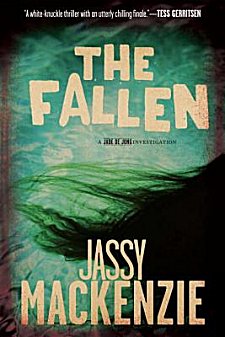 First Line: Themba Msamaya didn't suspect a thing on the morning he opened his door to death.

Private investigator Jade de Jong invites her lover, Police Superintendent David Patel, on a scuba diving holiday in hopes that it will solidify their troubled relationship. Instead, Jade discovers that she hates scuba diving, and David puts an end to their affair. However, the next morning, all differences are put aside when one of the resort's diving instructors is found stabbed to death in her room.

Amanda Bolton is a most unlikely murder victim. She was a quiet, intelligent woman who, until a few months ago, was an air traffic controller. She had few acquaintances. The only loose end is a postcard Jade finds in her room that contains a mysterious message. There's no doubt about it: relationship woes or not, Jade and David are going to have to work together in order to solve this murder.

I've long been intending to read one of Jassy Mackenzie's Jade de Jong mysteries, and I'm glad that I finally made the time. The Fallen is a well-plotted, fast-paced book that kept me guessing until the end and vowing to add this South African author's books to my Must Read List. If you're wondering how well I handled reading the third book in the series first, wonder no more. I had no problem at all. Mackenzie provides just enough back story to ensure that the storyline isn't confusing while tantalizing me into feeling that I need to read the previous books in the series.

Of course the reason why I feel that I have to read the first and second books is private investigator Jade de Jong herself. She is a fascinating character who is a natural when it comes to having a gun in her hand-- and at the same time she's a very compassionate woman to the people around her. She and Superintendent David Patel are well-suited to working together. They both have the same style: they think on their feet, and their feet are usually running. Not for either of them is the focus groups and endless committee meetings type of decision-making.

The pace is almost non-stop as the investigation proves to have more than one focus, but even in the midst of all the seriousness and the relentless determination of Jade de Jong, Mackenzie knows just when to add touches of humor-- as she does with an emergency medical technician that keeps appearing on the scene.

If you're in the mood for a fast-paced, intriguing mystery with a strong female lead, let me suggest picking up a Jade de Jong book by Jassy Mackenzie. I wouldn't be at all surprised if you decided to read the other books in the series as well!
by Cathy at Friday, April 13, 2012