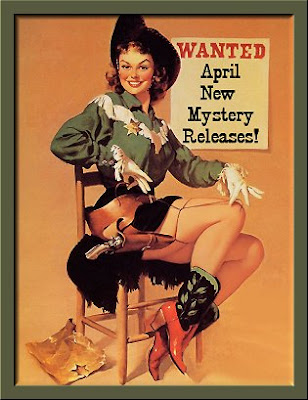 The beginning of a new month may find me heading for the grocery store to stock up an empty pantry, photographing wildlife and petroglyphs with Denis, and putting together a craft room (I can't believe all the places that I've squirreled away my supplies!)-- but you know that I'm also going to keep an eye on new crime fiction that will hit the shelves in April.

Here are a dozen books that I'm looking forward to getting my hands on. As usual, the books are grouped by release dates, and I've included the information you'll need to find them at all your favorite book spots. Hopefully I've chosen a title or two that you just can't do without either. Happy reading! 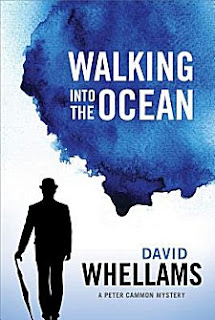 Synopsis: "Introducing veteran Scotland Yard Chief Inspector Peter Cammon, this novel finds Cammon journeying to the Jurassic Coast to solve a seemingly ordinary domestic crime. At first glance, the perpetrator appears to have murdered his wife before drowning in the English Channel, but Cammon soon learns that his case is merely a sideshow. A broader series of murders has been unfolding along the cliffs, baffling the local police. Realizing that his assignment cannot be completed without figuring out the serial killings that threaten the region, the detective travels from London, Dorset, and Devon to the island of Malta, relentlessly following the overlapping threads of the two cases to their shocking climax. The first installment in a series of three, this cliffhanger sets a chilling tone for the British sleuth’s forthcoming mysteries." 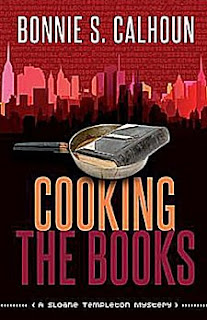 Synopsis: "After her mother dies from a heart attack, Sloane Templeton goes from Cyber Crimes Unit to bookstore owner before she can blink. She also 'inherits' a half-batty store manager; a strange bunch of little old people from the neighborhood who meet at the store once a week, but never read books, called the Granny Oakleys Book Club; and Aunt Verline, who fancies herself an Iron Chef when in reality you need a cast iron stomach to partake of her culinary disasters. And with a group like this you should never ask, 'What else can go wrong?'

A lot! Sloane begins to receive cyber threats. While Sloane uses her computer forensic skills to uncover the source of the threats, it is discovered someone is out to kill her. Can her life get more crazy?" 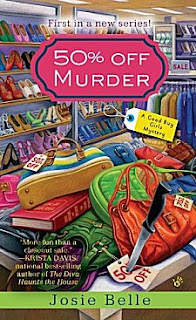 Synopsis: "Maggie Gerber-one of the founding members of the Good Buy Birls- loves her quiet life in St. Stanley, Virginia. But all that changes when Sam Collins, her old flame, moves back to town as the new sheriff. On top of that, Claire Freemont, a librarian and the newest member of the Good Buy Girls, starts acting utterly strange.

When Maggie goes to visit her the next day at the library, she finds the body of a very dead man. Turns out the man is someone from Claire's past. As the handsome new sheriff zeroes in on Claire, it's up to Maggie and the rest of the Good Buy Girls to use their bargain-hunting skills to hunt a killer-while making sure they don't pay too much in the process...." 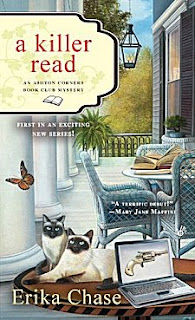 Synopsis: "For the first meeting of the Ashton Corners Mystery Readers and Cheese Straws Society, six friends gather in Molly Matthews's old Southern mansion-including Lizzie Turner, a reading specialist with a penchant for mysteries. But the mystery book club meeting becomes the scene of an actual murder when a stranger is shot-and nobody knows who the victim is, or how Molly's antique gun came to be used as the murder weapon.

Then Lizzie begins finding mysterious manuscript chapters in her mailbox. As she and the book club members try to read between the lines, Molly surfaces as the next name on the killer's list...." 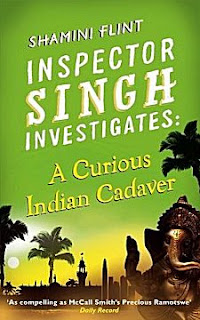 Synopsis: "Inspector Singh is sick of sick leave, so when Mrs. Singh suggests they attend a family wedding in Mumbai, he grudgingly agrees - hoping that the spicy Indian curries will make up for extended exposure to his wife's relatives. Unfortunately, the beautiful bride-to-be disappears on the eve of her wedding - did she run away to avoid an arranged marriage, or is there something more sinister afoot? When a corpse is found, the fat inspector is soon dragged into a curious murder investigation with very firm instructions from Mrs. Singh to exonerate her family. But as he uncovers layer upon layer of deceit, he knows it isn't going to be that easy...." 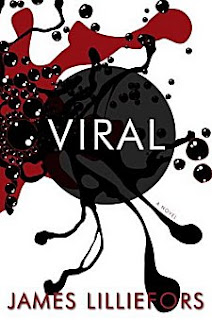 Synopsis: "In remote pockets of the Third World, a deadly virus is quietly sweeping through impoverished farming villages and shanty towns with frightening speed and potency. Meanwhile, in Washington, a three-word message left in a safe-deposit box may be the key to stopping the crisis—if, that is, Charles Mallory, a private intelligence contractor and former CIA operative, can decipher the puzzle before time runs out.

What Mallory begins to discover are the traces of a secret war, with a bold objective—to create a new, technologically advanced society. With the help of his brother Jon, an investigative reporter, can he break the story to the world before it is too late—before a planned 'humane depopulation' takes place?

As the stakes and strategies of this secret war become more evident, the Mallory brothers find themselves in a complex game of wits with an enemy they can’t see: a new sort of superpower led by a brilliant, elusive tactician who believes that ends justify means." 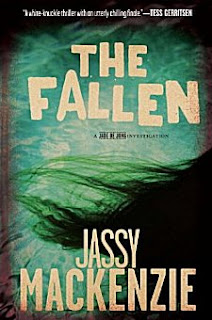 Synopsis: "When P.I. Jade de Jong invites Superintendent David Patel on a scuba diving holiday in St. Lucia, she hopes the time away will rebuild their conflicted relationship. Jade’s dreams are soon shattered when David calls off their affair, forcing her into the arms of environmentalist Craig Niewoudt. But the next morning, romantic issues are put aside when a scuba diving instructor, Amanda Bolton, is found brutally stabbed to death.

Amanda is a most unlikely candidate for murder—a quiet and intelligent woman who until a few months ago pursued a high-powered career as an air traffic controller. She had few acquaintances and no lovers. The only loose end is a postcard in her room from Johannesburg-based Themba Msamaya, asking how she is doing 'after 813 and The Fallen.' Jade and David put their differences aside and start the deadly hunt." 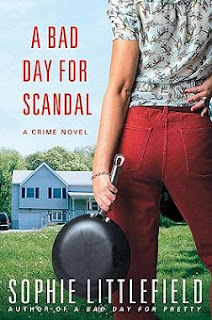 Synopsis: "When big-city businesswoman Priss Porter returns to town with a body in her trunk, she expects Stella Hardesty to dispose of it for her. She’s even got a snapshot of Stella doing what she does best—curing women-beaters by the use of force—in case Stella needs convincing. But Stella refuses to cooperate, only to hear later that Priss has gone missing. Stella is implicated when Sheriff 'Goat' Jones discovers a scarf she left at the house. He warns her to stay local, but Stella and her partner, Chrissy Shaw, go looking for Priss in Kansas City. When Priss’s body is found, Stella must investigate a host of suspects, including a crooked but libidinous female judge and a coterie of jealous male escorts.

Sophie Littlefield packs a punch with this third entry in the award-winning, critically acclaimed series." 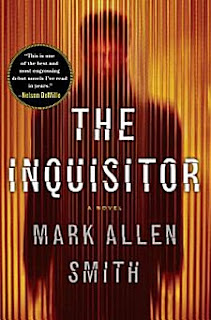 Synopsis: "Geiger has a gift: he knows a lie the instant he hears it. And in his business—called 'information retrieval' by its practitioners—that gift is invaluable, because truth is the hottest thing on the market.

Geiger's clients count on him to extract the truth from even the most reluctant subjects. Unlike most of his competitors, Geiger rarely sheds blood, but he does use a variety of techniques—some physical, many psychological—to push his subjects to a point where pain takes a backseat to fear. Because only then will they finally stop lying.

One of Geiger's rules is that he never works with children. So when his partner, former journalist Harry Boddicker, unwittingly brings in a client who demands that Geiger interrogate a twelve-year-old boy, Geiger responds instinctively. He rescues the boy from his captor, removes him to the safety of his New York City loft, and promises to protect him from further harm. But if Geiger and Harry cannot quickly discover why the client is so desperate to learn the boy's secret, they themselves will become the victims of an utterly ruthless adversary." 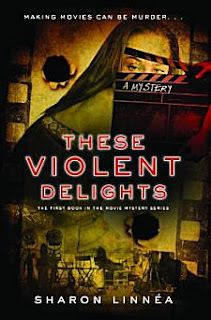 Synopsis: "As the studio that made the classic film Tristan and Isolde prepares for a 20th anniversary re-release, Anastasia Day, the film's female star, realizes how many members of the cast and crew have met untimely deaths.  Knowing that the murderous rage must somehow have been triggered during shooting, she fights the agoraphobia that has kept her prisoner in her late husband's English castle to uncover the culprit before the gala reunion turns into a mass murder.  Can Anastasia stop the murderer before the reunion becomes everyone's final curtain?  At once a masterful 'whodunit' and sweeping romance, These Violent Delights tells both the story of the murder investigation and the violent delights on the set of the movie that prompted the deadly spree.  Sure to excite and entertain, These Violent Delights will capture the hearts of romance lovers, leave thrill-seekers on the edges of their seats, and will leave all audiences eager for the upcoming installments in the Movie Mysteries series." 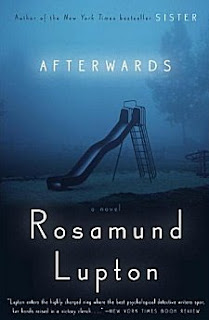 Synopsis: "The school is on fire. Her children are inside.

Grace runs toward the burning building, desperate to reach them.

In the aftermath of the devastating fire which tears her family apart, Grace embarks on a mission to find the person responsible and protect her children from further harm.  This fire was not an accident, and her daughter Jenny may still be in grave danger. Grace is the only one who can discover the culprit, and she will do whatever it takes to save her family and find out who committed the crime that rocked their lives.  While unearthing truths about her life that may help her find answers, Grace learns more about everyone around her -- and finds she has courage she never knew she possessed.

Powerful and beautiful, with a riveting story and Lupton’s trademark elegant style that made Sister such a sweeping success, Afterwards explores the depths of a mother’s unswerving love." 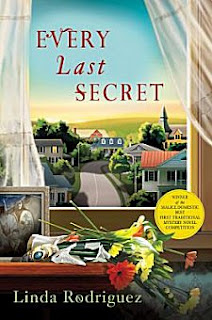 Synopsis: "Half-Cherokee Marquitta 'Skeet' Bannion thought she was leaving her troubles behind when she fled the stress of being the highest-ranking woman in the Kansas City Police Department, a jealous cop ex-husband, and a disgraced alcoholic ex-cop father. Moving to a small town to be chief of a college’s campus police force, she builds a life outside of her work. She might even begin a new relationship with the amiable Brewster police chief.

All of this is threatened when the student editor of the school newspaper is found murdered on campus. Skeet must track down the killer, following trails that lead to some of the most powerful people in the university. In the midst of her investigation, Skeet assumes responsibility for a vulnerable teenager when her ex-husband and seriously ailing father wind up back on her hands. Time is running out and college administrators demand she conceal all college involvement in the murder, but Skeet will not stop until she’s unraveled every last secret."

So... did I manage to tempt you with a book or three? (I don't want to be alone here, ya know!) Which ones made it to your wish lists?