The Professionals by Owen Laukkanen 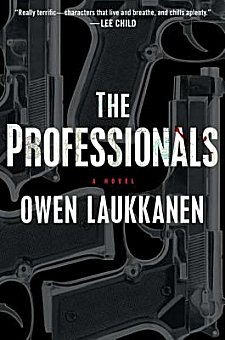 Recent University of Washington graduates Arthur Pender, Marie McAllister, Matt Sawyer, and Ben Stirzaker had no luck finding jobs after graduation in the lousy economy, so they decided to start their own business. Traveling back and forth across the country, they carefully target rich men, kidnap them, hold them for a relatively low ransom, get their money, and give the hostage back to his family. They estimate that in two more years, they'll have enough money stashed away to retire in the Maldives.

But these best laid plans will go the way of all the rest. The four kidnap the wrong person, and they find themselves fighting for their lives-- caught between mobsters that will stop at nothing to kill them, and two law enforcement agents who will stop at nothing to put them behind bars. As the four fight to survive, they learn whom the true professionals really are.

This debut novel reads like a house afire. Laukkanen's sense of action and pacing are first rate, and his story follows close behind (although it has a bug or two).

The premise is intriguing, but not entirely believable. For example, two of the kidnappers obtained degrees in English literature and History-- and they expected to find jobs in a horrible economy? The character with a degree in Computer Sciences could easily have found a job, but is a more passive type who's willing to let someone else call the shots. Let's face it: these four are merely using the economy as an excuse; they all wanted to get rich fast so they wouldn't have to work.

The two law enforcement characters, Minnesota Bureau of Criminal Apprehension investigator Kirk Stevens and FBI agent Carla Windermere, are interesting, and I wanted to know more about them. Having two separate groups of characters on which to focus attention was undoubtedly meant to create tension and to make readers aware of the fact that the people on both sides are deserving of sympathy, but it didn't work in this instance. Many thrillers focus on the story and the action. Characters come further down the list of priorities; however, Laukkanen places equal importance on them, so the characterization has to work. Splitting focus between two sympathetic groups meant that none of the characters were as finely drawn as they could have been and my loyalty was with none of them.

With that said, Owen Laukkanen is a writer to watch. He's got a knack for action, pacing, story, and characters. Once he brings them all into finer focus, he'll have it made.