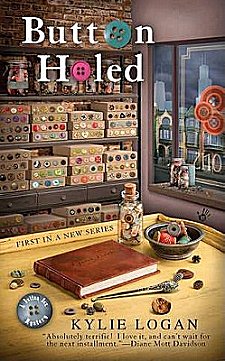 First Line: Here's the thing about walking into your button shop at five in the morning and running smack into a hulk of a guy wearing a black ski mask: it tends to catch a girl a little off guard.

Josie Giancola has become one of the country's leading experts on buttons, and she is now the proud owner of the Button Box-- her very own shop in a Chicago brownstone. Josie's reputation has attracted the notice of one of the biggest stars in Hollywood because the diva wants one-of-a-kind buttons for her custom made wedding gown. When the Button Box is ransacked and the actress found murdered in the shop, Josie has to stop thinking buttons... and start concentrating on murder.

As many other readers probably did, I picked up Button Holed because of the promise of a bit of history on buttons, that indispensable item on our clothing that is taken for granted every single day. What I found was a workmanlike effort that sets up a new series nicely but in a curiously bland way.

The mystery is a good one and should keep the reader guessing. Josie even gets to take a trip to West Virginia following a button clue that provides a bit of information about handmade buttons that I enjoyed. Unfortunately the trip and the information supplied the only real color in the entire book.

Josie herself is an interesting character with an intriguing background, but the most she really has to do with buttons in this book is to pick them up and sort them every time her shop's ransacked. She also repeatedly tells us that men find women button fanatics boring. I suppose this is a bit of humor, but after the second or third time I read it, it became boring-- especially since Josie has an ex-husband and a handsome policeman paying attention to her. Please don't tell me men find you boring, Josie; actually put me in the middle of a scene where you're waxing poetic about Bakelite. Let me listen to every word, and let me watch your date wind up snoring softly, face down in a plate of linguine.

As for that ex-husband paying attention to her, I found this to be a weakness in the book. Josie's ex-husband is a gambler. His refusal to admit that he's addicted and the fact that he'll say or do anything to get his hands on more money to either gamble or pay off loan sharks is what destroyed their marriage. Throughout the book, he's popping out of the woodwork, scaring the pudding out of Josie, and trying to persuade her to give him money-- and she does. Perhaps this is meant to show that Josie's a good sport and is a vulnerable woman. I know many more women besides myself who are inclined to think this is stupidity-- a trait that I don't care to have in the main character of any book that I read.

When Josie parted with some of her hard-earned cash, I almost closed the book right then and there, determined not to finish it, but I did. There's good to be found in Button Holed. Although none of the characters caught fire in my mind and only one or two enjoyable taste buds were tingling as I turned the pages, it is a solid beginning to this series with the premise of button-themed murder. It will be interesting to see how it continues.