The Wedding Gift by Kathleen McKenna 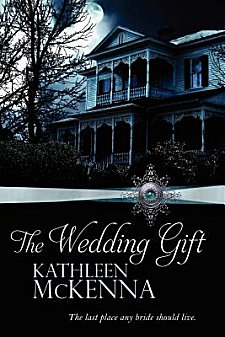 First Line: Well, if I didn't want to cry, I guess I would be laughing.

High school senior Leeann Worthier is a girl from the poor side of town who's learned to trade on her good looks to get the things she wants. One of the things she wants is a life on Easy Street, which she obtains by marrying the rich boy in town after graduation.

As a wedding gift, Leann's new in-laws give the couple the Willets House. On the surface, being given a mansion to live in sounds like a good deal, but the Willets House has a history. You see, one day about twenty years ago, Robina Willets killed her husband, her five children... and then committed suicide in that very house. A few years later, two boys dared each other to go in the house. One of the boys died-- Leeann's brother.

Leeann's not crazy about moving into the house, but it is beautiful, and it does have a nice big swimming pool.... It's not until Leeann learns that she and her new husband are living with a very unhappy and very dangerous spirit that Leeann becomes afraid.

Most readers are going to know within the first few pages whether or not they're going to like the book. Leeann tells her own story, and if you like her, you're going to like the book. McKenna nailed Leeann's character. In many ways, she's a typical teenage girl, obsessed with her looks, her clothes, and boys. Her father likes to drink, so the family's never had much, and Leeann learned at an early age that folks are usually quite nice to pretty girls. In turns she's ignorant, hateful, devious, laugh-out-loud funny, and has an honesty about herself that ultimately won me over.

Another element of the book that the author gets just right is what I call the Creep Factor. I don't scare easily, but the ghost in the Willets House had my flesh crawling and had me listening for faint, unusual noises in the house as I read. What's even better, readers learn that the ghost's story is actually heartbreaking, so there's a fundamental emotional shift from fright and repulsion to understanding and compassion.

A feisty, flawed narrator who's not afraid to speak her mind. A downright scary ghost worthy of compassion. And a big surprise when the identity of the person who caused it all is revealed. Leeann may turn some folks away at the door, but for those who are won over by her sass and honesty, there are genuine chills and thrills to follow.