The Steam Pig by James McClure 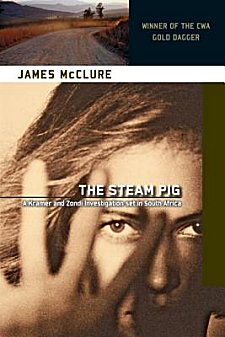 First Line: For an undertaker George Henry Abbott was a sad man.

In this first book in the Kramer and Zondi mystery series set in South Africa and originally published in 1971, a beautiful blonde has been killed by a bicycle spoke to the heart. The use of bicycle spokes as murder weapons is the signature of Bantu gangsters. Why would the Bantu kill a white woman in this manner? It's something that Kramer and his Bantu partner, Zondi, are going to have to find out.

This is a series that I've been meaning to sample for a long time because I've heard so many good things about it. Although I found McClure's gritty, almost terse, writing style a bit confusing from time to time and his characters not very well fleshed out, I found a lot to like about The Steam Pig.

I found the well-paced plot to contain several surprises, but more than anything I loved McClure's subtlety. This book was written during the time of apartheid, and McClure's books were wildly popular in South Africa when they were first published. This means that these mysteries had to appeal to both supporters and opponents of the system of racial segregation that finally came to an end in 1994.

You can find the language of racism in The Steam Pig. There are kaffirs, "boys", etc.-- but the language is applied with a light touch. The races are segregated. The laws are being upheld. But they are being upheld by a mixed race partnership that is really a friendship if you take the time to look deep enough. And it will take time because Kramer and Zondi are experts at toeing the "boss and boy" line when in company. They don't stand out; they blend in. But for anyone who cares to observe closely, it's easy to see that the laws Kramer and Zondi insist upon being upheld first aren't the laws of racial segregation; they're the laws of human decency and finding killers regardless of the color of the victim's skin.

Although I really wish Kramer and Zondi had been fleshed out a bit more, I was-- and still am-- in awe of McClure's skill. He put together an engrossing mystery that's all about what's beneath the surface. I'm looking forward to reading the other books in the series.