One Blood by Graeme Kent 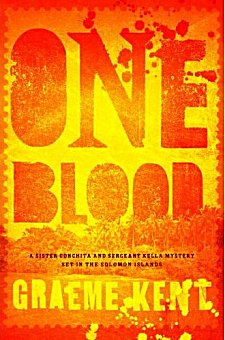 First Line: The Japanese destroyer came out of the night at forty knots like a huge shark snarling across the lagoon.

Sister Conchita may be just a bit too forthright and prone to act now and ask forgiveness later. She's been sent to a run-down mission in the Western District of the Solomon Islands. Her assignment being only temporary, she's still determined to wake up the four obstinate elderly nuns and get their help in cleaning up the place. Her plans don't get off to a good start. On the mission's very first open day, they are besieged by tourists,  two of the four nuns are AWOL, and a man is killed in the chapel. Sister Conchita can't believe that the government is content to call a very suspicious death a heart attack, and she is not prepared to let the matter rest.

Normally she would ask Ben Kella for help. Kella, a sergeant in the Solomon Islands Police Force and an aofia (hereditary spiritual peacekeeper of the Lau people), he's assigned to investigate the sabotage that's been threatening the local operations of an international logging company.

As Sister Conchita and Kella begin their investigations, they discover common elements-- especially three strange, unfriendly men who are very interested in the islands of Kasolo and Olasana. You see, it's 1960, and in a few weeks the people of the United States will be deciding whether to vote for Richard Nixon or John F. Kennedy as President. The islands of Kasolo and Olasana are where the survivors of PT 109 hid from the Japanese and tried to recuperate. Although it's not the first time strangers have come sniffing around in search of stories about Kennedy, there's something different... something ominous... about these men.

Once again Graeme Kent has written a mystery that transported me to the Solomon Islands of the 1960s. In this place, at this time, World War II is not a thing of the past. People canoe across lagoons over the easily visible twisted hulks of fighter planes and ships. The "good old boy" colonial government is still at work, filled with officials who do not want to admit that their days are numbered and that the educated young islanders they're ignoring today will be the leaders of tomorrow. Smugglers still know the secret coves and hiding places of these waters, and they use them.

Having a main character who's not only a policeman but a spiritual leader of his people gives the reader a chance to learn the customs of the peoples of the Solomon Islands in a very non-intrusive way. Many times Kella responds to the summons for a policeman and discovers that his services as aofia are really required.

I have to admit that the plot line concerning JFK put me in a pair of blinders that shielded me from almost everything else but Kent's excellent cast of characters. The author seems to know instinctively when it's time to insert a laugh-out-loud funny piece of humor to lighten the mood, and although those old nuns in that run-down mission could be by turns infuriating and heartbreaking, they could also be  extremely funny.

Sister Conchita is as headstrong and stubborn a person as one will ever meet, and one has to wonder who's going to give up first: Sister Conchita or the Catholic Church. Sister Conchita and Ben Kella are both outsiders in their own worlds who want to make things right. Pairing them is a bit of genius.

As I said earlier, the plot line concerning JFK had me so engrossed that when the solutions to the other threads concerning the murder of the man in the mission chapel and the sabotage at the logging company site were revealed, I was completely surprised. That doesn't happen very often at all.

When I read the first book in the series, Devil-Devil, I thought it could be the start of something very special. Now after reading One Blood, I know this is something very special. Let this series be your next armchair journey to a beautiful faraway land filled with fascinating customs, wonderful characters, and delectable mysteries. Then your smile will be as big and as bright as my own when I hear of Graeme Kent's newest book.


One Blood at Amazon.
One Blood at The Book Depository.
One Blood at Your Favorite Indie Bookseller.
Please stop by Monday, March 5,
when Graeme Kent will be my guest on
Scene of the Crime!
by Cathy at Friday, February 10, 2012