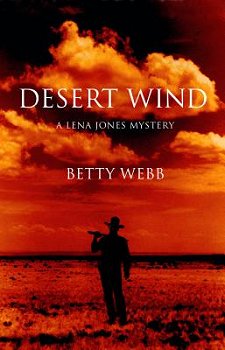 First Line: From his vantage point with the horses on a small hillock, Gabe Boone watched the cameras track the actor across the simmering desert floor toward the skin-draped yurt.

Jimmy Sisiwan-- Lena Jones' partner in Desert Investigations-- is her bedrock. Not only does she rely on his talent and expertise at work, she considers him family. Having been shot in the head and left for dead by her mother and then raised in a series of foster homes, Lena doesn't give her trust or love to anyone easily. So when Jimmy is arrested and jailed in the remote northern Arizona town of Walapai Flats, Lena closes down the Scottsdale business and heads north.

When she gets there, she finds a town divided over the issue of plans for a new uranium mine. Some welcome the desperately needed new jobs. Others find two reasons to be worried: (1) The owner of the new mine previously owned another uranium mine on Navajo land that was so mismanaged, it had to be closed down due to polluted water and soaring rates of cancer. (2) The new mine is ten miles from the Grand Canyon, and all water run-off would drain directly into it. This is one issue that has already turned deadly-- and shows no sign of stopping.

Characters and story are everything in Desert Wind. As part of her investigation, Lena becomes acquainted with Jimmy's adoptive father, a rancher who lives outside town, and many other Walapai Flats inhabitants. The longtime residents are tough nuts to crack, and Lena soon learns why. Through chapters tucked in between the ones with  present-day action,  we learn that Walapai Flats is still suffering from a sixty-year-old injustice: the United States' testing of nuclear bombs on its own citizens. For decades, these people have had family members die while they're lied to by strangers who smile and carry credentials.

(The United States conducted atmospheric and underground testing of nuclear bombs in Nevada during the 1950s. Low population density, mile upon mile of flat, government-owned land, and an easterly wind blowing away from the populous west coast were factors that decided in the Nevada site's favor.)

Unfortunately, it was no favor for any living thing caught in the path of those easterly winds, and Betty Webb once again proves how brilliantly she can break our hearts and raise our ire against blatant injustice while she spins a tale of mystery. Whenever someone asks me about books that depict the "real Arizona," I start talking Betty Webb and Lena Jones. Yes, these books deal with human rights issues, but the author never once forgets the mystery or the people who populate it. The characters, the land, the human rights topics-- Webb serves up the whole enchilada for a true reading hunger.