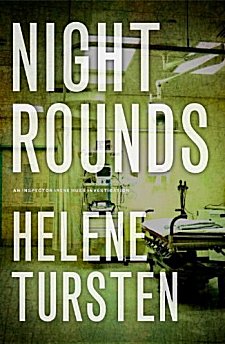 
First Line: "You're absolutely certain this was the nurse you saw last night?"


An old hospital is hit by a blackout. When the lights come back on, one nurse is dead and another has vanished. There's only one witness, and she claims that Nurse Tekla is responsible. The witness isn't being taken seriously because Nurse Tekla died in the hospital over sixty years ago.

Enter Irene Huss, a former Ju-Jitsu champion, the mother of twin teenage girls, the wife of a successful chef, and a Detective Inspector in the Violent Crimes Unit of Goteborg, Sweden. It is her responsibility to make sense of doctors, nurses, patients, ghosts... and all the complex relationships involved.

This is one series that's hurt by the way it's being published in the US. Undoubtedly due to legalities beyond my ken, the publishing order has been #1, #3, #5, and now with Night Rounds, #2. I read a lot of series, and I like to read them in order as much as possible, but in this case, I'd need to learn Swedish in order to do so. Irene Huss is a woman whose personal life is very much a part of the story and of the sort of character she is. Reading these books out of sequence is a bit like repeatedly stubbing your toe-- When did he? Why are they? She stopped? How did? Huh? If you like to read series (and read them in order), you might want to keep this in mind. If you're coming to Night Rounds with a clean slate, this won't make a bit of difference, so we'll move right along.

Perhaps it's because she's in her forties, but Irene Huss seems to size up everyone she meets by how they look. It's a bit annoying, but I think it's meant to convey the fact that Irene feels time is marching on and she's ageing faster than she'd like. This habit has everything to do with her, and very little to do with the people with whom she's comparing herself. As I said earlier, Irene's personal life has a great deal to do with the type of inspector she is and with the action in the book. This adds a dimension to the book that I really enjoy. Police who are The Job and nothing but The Job tend to become boring.

Irene's investigation is anything but boring. She and her team are stymied at every turn in that old, crumbling pile of a hospital with its one doctor and tales of the nurse who hung herself in the attic. The entire building seems filled with lurking shadows and breathy whispers. The case keeps returning to Nurse Tekla, Nurse Tekla, Nurse Tekla until Irene wants to scream.

The only way she can get rid of Nurse Tekla is by doing the job painstakingly. By interviewing every person. By checking all the records. By knocking on every door. By double-checking. By triple-checking. It's long hard work, but Huss and her team are up to the task of taking the focus off the ghost stories and turning it on a very real killer. Helene Tursten's series is a fine blend of character study and police procedural, and regardless of their publishing order, I enjoy reading her books.