Scene of the Crime with Author Layton Green!

Layton Green is the author of two books featuring former diplomatic security agent Dominic Grey. I've had the pleasure of reading the first, The Summoner, so I was very happy when he said yes to my interview!

If you'd like to know more about the author, here are a couple of links for you:

Now let's get to the fun part, shall we? On to the interview! 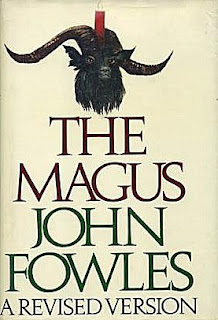 As a child, the first books I loved were The Hardy Boys series, which were just great fun and always took me on a new adventure.  As an adult, the first novel that truly took my breath away, both as a great story and as a work of art, is The Magus by John Fowles.  It remains my favorite novel.

[I used this particular cover because that's the edition I read and loved!]

Tier 1: being with my family, reading and traveling.  After that, it would be trying new restaurants, practicing Jujitsu, playing sports (soccer, beach volleyball), hiking, learning languages, board games, seeing good flicks, and a few other things.  I'm a bit of a dilettante.

I don't really have a hometown, but I'll speak to South Florida, which is where I live now.  I'd suggest touring a hand-rolled cigar factory on Calle Ocho, alligator and bird watching in the Everglades, having drinks at a Tiki Hut by the beach in Hollywood, and eating fresh seafood at Alabama Jack's, which is a floating barge on a swamp canal just before Key West.

Harrison Ford.  Not because he in any way resembles me or my life, but because he's Indy!  And Hans Solo!  And how cool would that be!

The Magus by John Fowles.  I am simply awed by its genius: plot, dialogue, setting and atmosphere.  It's set on a remote Greek island, and I read it on my first trip to Greece.  It's a mind-bending, quasi-supernatural coming of age story that I can read over and over.


What did you do the first time you saw one of your books on a shelf in a bookstore?

The first time I saw my book on a shelf in a bookstore, I told the person next to me (a stranger) that I wrote it and talked them into buying it.

I was speaking and signing books at a book conference in Florida (the Emerald Coast Writer's Conference, which rocks).  I was speaking about Intellectual Property law for writers (I'm an attorney), and a woman wanted to know whether, if she revealed intimate details about a certain Mexican drug cartel (which she apparently had firsthand knowledge of) in a nonfiction work, she could be sued for defamation or invasion of privacy.  I said, "Lady, you might have bigger things to worry about than a lawsuit."

I will be forever grateful to ebooks, as they started my career. Ebooks are a great way for new authors to find an audience, and as a reader, I liken it to iTunes: I have sampled and found a plethora of new authors and musicians I love due to a wider range of availability.  I don't think it's any easier to gain an audience on Kindle or Nook than it is in traditional publishing (assuming you're published), but it really gives overlooked authors a chance to get their work out there and prove its value, as well as those authors who don't fit neatly within publishing paradigms, or those who simply want total control over their works.


Thank you so much for spending this time with us so we could get to know you a little better. May Dominic have many adventures, and your book sales do nothing but increase!