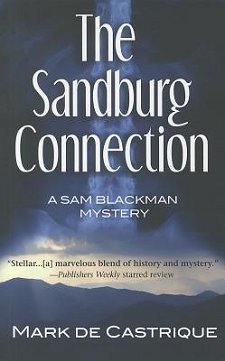 First Line: The beep caught me in mid-bite.

Sam Blackman and his partner, Nakayla Robertson, have been hired by an insurance company to follow Professor Janice Wainwright, who's suing a surgeon for malpractice. The insurance company wants to catch Wainwright doing things she's not supposed to be able to do so her case can be thrown out of court. So far, the things that Sam has learned about Wainwright aren't very complimentary, and he believes that this case will be pretty open-and-shut, especially when Wainwright drives to Connemara (Carl Sandburg's home in Flat Rock, North Carolina) and begins climbing a tough hiking trail to the top of a mountain.

Sam, who lost a leg while serving in Iraq, isn't properly equipped to follow her, but he does, only to hear her fall and find her bleeding and semi-conscious. "It's the Sandburg verses" were her last words. An autopsy is performed which proves that the surgeon bungled the operation, and Sam is left with questions that need answers. Why did Wainwright climb that mountain when she was in so much pain? Was someone else there? What are the Sandburg verses? When Wainwright's farmhouse is broken into and Sandburg books stolen, Sam becomes convinced that someone is searching for information that's worth killing for.

Sometimes I'm ashamed of myself. Why is it that, when I find out someone is being investigated for some sort of insurance fraud, I automatically assume that person is guilty? With my distrust of large corporations, you'd think that the opposite would be true. Personal shortcomings aside, I liked seeing how the perception of Wainwright's character evolved through the opening chapters of the book.

When Sam learns that Wainwright has a teenaged daughter, he goes to meet the girl, and she is an emotional, mixed-up mess-- as anyone her age would be when faced with the death of a parent. The girl tugs on the heartstrings in more than one way. Yes, she is the catalyst for doing what's right and for doing what's best for her, but she also introduces a welcome note of humor in the form of a pregnant goat. How Sam reacts to the goat is very funny indeed.

Thanks to Mark de Castrique, I now know that Asheville, North Carolina, is a literary hotbed.  Sam Blackman has solved mysteries involving Tom Wolfe and F. Scott Fitzgerald; now it's Carl Sandburg's turn. As long as he writes 'em, I'm going to read 'em. The famous literary figure is the hook that draws me in, and the team of Sam and Nakayla keeps me taking the bait. The two have an easy, witty chemistry that makes the pages turn all too quickly, and the Asheville area is scenic and rich in history. What a combination! I may even read up on Asheville in order to try to guess what their future investigations may be!