A Fountain Filled With Blood by Julia Spencer-Fleming 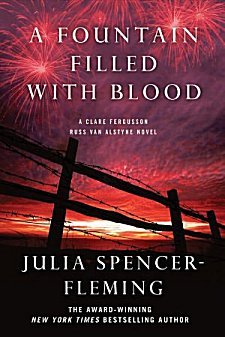 First Line: The yahoos came by just after the dinner party broke up.

Small towns have a reputation for being quiet and safe that's not always deserved. The same holds true for Millers Kill, New York. The Fourth of July weekend brings a spate of vicious attacks that have Reverend Clare Fergusson and Police Chief Russ Van Alstyne reeling-- not only because of the brutality but because the victims seem to have been chosen because they're gay.

When the third attack on an out-of-town developer ends in murder, Clare and Russ begin thinking outside the box. Could these attacks be connected to the murder victim's plan to open an upscale spa outside of town? What Clare and Russ don't know is that their thinking is going to lead them straight into danger.

It hasn't been that long since I read-- and fell in love with-- the first book in this series, In the Bleak Midwinter. I wasn't even halfway through that book when I began ordering all the rest of the volumes in the series. I honestly try to pace myself through series, especially when they're as good as this one started out being. After all, the faster I gobble them up, the longer I'll have to wait for the next book to be published. However, I don't feel quite so guilty about reading A Fountain Filled With Blood so soon after the first. You see... I told my husband about In the Bleak Midwinter, and as of the writing of this review, he's already finished all the books in the series. When he found out I was only on the second book, two words came to mind to describe his facial expression: "cat" and "canary."

As I read this book, I see that Clare and I are doomed to disagree about her choice of transportation, but as long as her choice doesn't put her life in danger again, I'll just smile and shake my head. One of the things about this series that has grabbed me by the throat is the sheer power of Spencer-Fleming's characterizations. Clare and Russ are real. I catch myself talking to them as I read. (This time I remember yelling, "Check the helicopter!" several times.) They have wonderful senses of humor. They make mistakes and wonder how they're going to make things right. And neither one is about to stand idly by when someone is in trouble. A Fountain Filled With Blood shows both of these characters in action: Russ in his protective police chief best, and Clare putting her Army helicopter pilot training to good use.

I know I've been praising the characters in this book to the skies, but that's not the only good thing to be found. Spencer-Fleming provides some excellent misdirection throughout as to the true motivations behind the crimes. I didn't put all the pieces together until the action was gearing up for the grand finale.

As much as I've enjoyed the first two books in this series, I'm going to make myself slow down. I don't want to be a whiner, impatiently waiting for the next book to be published. And if you haven't read any of Julia Spencer-Fleming's books, I have only one question for you: What on earth are you waiting for?