Mind Over Murder by Allison Kingsley 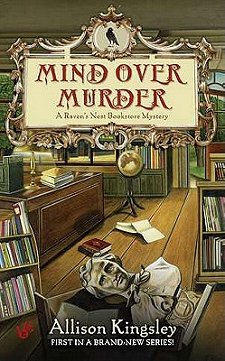 First Line: "Stephanie Quinn Dowd, you've got to be kidding!"

Clara Quinn has returned to her hometown in Maine after living in New York City. While she looks for another job, she agrees to work at the Raven's Nest Bookstore to help the owner, her cousin Stephanie.

The bookstore has an enemy-- Ana Jordan-- a fellow businesswoman who believes that the bookstore's occult section is leading the town's youth astray. Molly, number one employee at the Raven's Nest Bookstore, has made no bones of the fact that Jordan works her last nerve and that Molly would be very happy if the woman vanished off the face of the earth.

When Jordan is found in the Raven's Nest stockroom with her head crushed by a bust of Edgar Allan Poe, Molly is the one and only suspect. Stephanie believes that they can prove Molly's innocence because she knows something no one else does: Clara has the "Quinn Sense": she can see into the future and read people's thoughts. Clara has spent years not listening to her gift, so this amateur investigation could prove very dangerous for all involved.

Stephanie did a lot of talking about Clara's "Quinn Sense" but it never really made an appearance. That could be chalked up to Clara's fighting and ignoring it for most of her life, but-- if it did work and work well-- this would've been a short story instead of a book.

As much as I hate to say this, it feels as though this book was phoned in from far, far away. There's the non-existent paranormal angle. Clara suffers from Silly Mother Syndrome. The book is supposedly set in a small town in Maine, but it really could've been anywhere. Clara's cousin Stephanie thought nothing of playing fast and loose with Clara's safety-- several times encouraging her to do dangerous things as if they were still children and there'd be no consequences. To her detriment, Clara knew Stephanie's suggestions were ill-advised but did most of them anyway.

Before I was halfway through the book, I was wondering why I was reading it. The plot is well-worn, none of the characters stand out... there's really nothing to set it apart from the competition. Needless to say, I'll be giving any future books in this series a miss. It's a shame because the author's writing style is very smooth and enjoyable to read.