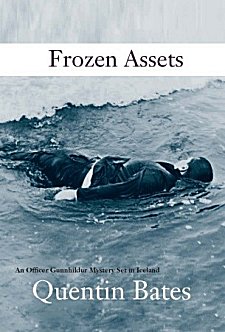 First Line: Water gurgled between the piles of the dock and the car's tyres juddered over the heavy timbers.

It's an open-and-shut case: the young man was drunk, stumbled off the dock late at night, and drowned. But Police Sergeant Gunnhildur wonders why on earth he'd get drunk in Reykjavik and then drive a hundred miles to fall into the harbor in her town and drown? Resources are tight, and although she's advised to stop looking into this death, Gunnhildur is nothing if not stubborn. The further she digs, the more she finds-- and the information and clues are leading all the way to Iceland's business and banking communities.

While Gunnhildur and her team investigate, a rookie crime journalist attaches himself to her in an attempt to get a scoop, and everyone in the country is wondering who's dishing all the dirt at Skandalblogger.com. When a second murder occurs, Gunnhildur knows she and her team must move even faster to catch a very wily killer.

Bates makes the landscape and weather of Iceland a brooding character in Frozen Assets. The economy, which worsens daily, highlights Iceland's precarious situation as a small country with very limited resources.

The secondary characters (with the exception of two spoiled rich sisters) are a bit two-dimensional, but the two main characters certainly aren't. The killer is ruthless and very, very smart if a bit arrogant. Having heard Officer Gunnhildur referred to as "the fat policewoman" once, he continues to dismiss her as such-- even when he discovers that she's more than a match for him.

Gunna is the single mother of two children. Her thirteen-year-old daughter is still in school while her nineteen-year-old son is working as a deckhand on a fishing boat. The reader knows that she's a bit out of the ordinary right from the start when she insists that the young man's death is not a case of accidental drowning, and then when the case is given to another policeman who wants to pin the death on his favorite suspect. As soon as she sees which way the wind is blowing, she refuses to have any part in it.

When Gunna knows she's right, she will not back down, regardless of whose face she has to get into, what she has to say, or how many hours she has to work. She's good at thinking on her feet, and she does an excellent job of running the investigation and keeping everyone focused and looking in the right directions. The best part of this book was watching the battle of wits between Gunna and the killer.

If there was any one thing that disappointed me in reading this book, it was that I found the tone to be curiously dispassionate. I found it difficult to become fully engaged in the story. That is a minor quibble however, as there is plenty to like in Frozen Assets. I'm looking forward to seeing what the future holds for Officer Gunnhildur, and I won't have to wait long. The second book in the series, Cold Comfort, just became available this week.