The Dark Vineyard by Martin Walker 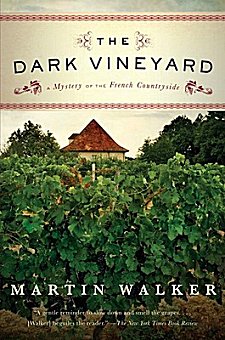 First Line: The distant howl of the siren atop the mairie broke the stillness of the French summer night.

The fire could have been a disaster for everyone in the area, but fortunately the fire crew performed their jobs quickly and well. With the ruins still smoking, Bruno-- the Chief of Police of the small village of St. Denis in southern France-- is left with a mystery. You see... officially the building that burned down does not exist. When Bruno begins investigating, he learns that it is an agricultural station that is working on genetically modified crops.

When Bruno starts checking into local environmentalists who might've set the fire, he learns that he has another potential problem on his hands. Max, a young local environmentalist who wants to make organic wine and Fernando, the heir to an American wine fortune are rivals for the same woman-- a young flirtatious Canadian student. But this affaire de coeur is soon overshadowed by  two suspicious deaths. Bruno definitely has his hands full.

This charming series is one in which the mystery often takes a backseat to the characters and the setting. The mystery is interesting, not because the reader needs to put a lot of effort into identifying the person responsible, but because the motivations are what must be uncovered. But while the motivations are being deduced, there is so much of Bruno and the village life of St. Denis to be savored!

Bruno is an excellent policeman because he is involved completely in the life of St. Denis. The mayor keeps him informed and a part of the business of trying to keep a small village alive and vibrant so the inhabitants won't be forced to move away to find jobs. Bruno is a part of the many traditions of St. Denis. He also coaches tennis and rugby teams. Bruno is most definitely not an absentee caretaker, and his local knowledge is invaluable when solving any type of case.

And as for those many traditions-- as Walker describes each one I feel as though I am becoming a part of the world he has created. This series was my "find" of 2011. It is a delight to visit with Bruno and the people of St. Denis and be transported into their world.