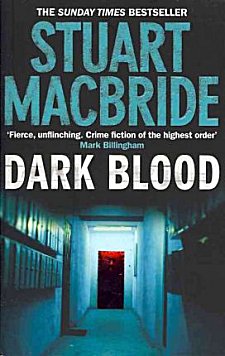 Richard Knox was a violent rapist of elderly men. He was caught, put on trial, and convicted of his crimes. While in prison, he found God, and now that he's been released all he wants is to make a new start in a place where no one knows his past. Unfortunately for Detective Sergeant Logan McRae, Knox's new home is in Aberdeen, Scotland.

Add Knox to a stew that contains gangsters from Edinburgh, a local crime lord, an inspector from Newcastle who wants to keep an eye on Knox, and folks from Newcastle looking for a missing mob accountant, and you can see that there's more than enough to keep McRae busy for two or three lifetimes. His problem is that he's still being jerked back and forth between two detective inspectors who can't seem to be able to live without McRae being at their beck and call every single hour of every single day.

MacBride writes edgy, violent tales with such a finely-honed dark sense of humor that I've often found myself laughing like a total nutter only a page or two after being left stunned and slightly sickened by something else. I know that makes me sound as if I'm a bit schizophrenic, but perhaps being a bit unbalanced helps you to understand what's going on once you've immersed yourself in MacBride's world.

I find myself having very strong and very personal reactions to the books in this series now. Logan McRae has found himself caught between two superior officers for far too long. At first, I found both of the superiors (and I'm using the term very loosely here) to be hilarious although their lack of willingness to do any real work greatly bothered me. I've gone through in the real world what McRae is going through in MacBride's fictional one. Although I did my best to find the humor in what I went through, there wasn't much to be found, and as McRae's woes keep going on a seemingly endless loop, almost every molecule of humor has been leached from the situation for me. I love the character of McRae too much to stop reading, so I'm hoping that MacBride will be kinder to him in the next book!

Despite my negative reactions I found Dark Blood to be another excellent book in this series. All the plot lines seem hopelessly tangled, and it's a miracle that McRae is able to sort out any of them at all. But MacBride reminds us that life isn't a fairy tale. Real life isn't neatly wrapped up and tied with a bow just as the last page is turned. The ending of Dark Blood may leave you as angry as it did me, but-- sadly-- what happens is far from being a new occurrence on planet Earth. I only wish that McRae had seen "The Shawshank Redemption" as many times as I have.