Come in and Cover Me by Gin Phillips 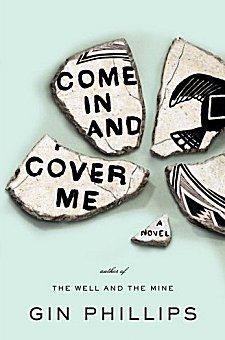 Ren's beloved brother Scott died in a car crash when she was twelve. Since that time, Scott has always been a presence in her life even though it may only be in the few notes of a song or a shadow in the moonlight. Twenty-five years later, her ability to connect with the ghosts around her makes her especially sensitive as an archaeologist. Ren has dedicated her life to breathing life into those people who lived in this world long before us. She is focused on recreating how they lived, in telling their stories.

Now she's on the verge of the most important discovery of her career. The spirits of two Mimbres women are guiding her-- and not just to the remnants of their own lives. They are also trying to deliver a message to Ren about her developing relationship with a fellow archaeologist who's working on the dig with her.

This book is enjoyable for the New Mexico setting as well as the archaeology and the information about the Mimbres culture. For those of you who tend not to like anything that smacks of the paranormal, you'll be happy to note that Phillips has an extremely delicate touch with it here. As you get to know Ren, the ghosts that surround her seem to be more a coping mechanism than spooky things that supposedly go bump in the night.

No matter how interesting the archaeology or the setting or the pottery-making skills of ancient tribes, Come In and Cover Me is all about Ren, and she is a fascinating character. Yes, she has dedicated her life to recreating the lives of those long-dead and to telling their stories, but in the process she's avoided living her own life. As the pages turned, I began trying to will Ren to change. I think you will, too.