V is for Vengeance by Sue Grafton 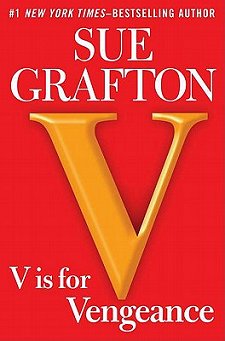 First Line: Phillip Lanahan drove to Vegas in his 1985 Porsche 911 Carrerra Cabriolet, a snappy little red car his parents had given him two months before, when he graduated from Princeton.

Phillip is a typical young man who believes he's ten feet tall and bullet proof. He also thinks he's a first-rate gambler, even though he owes thousands to a loan shark. If you're under the impression that his story doesn't end well, I won't try to change your mind.

From Phillip's story, we move to Kinsey Millhone, who's just celebrated her thirty-eighth birthday by being on the receiving end of two black eyes and a busted nose. (Who says trying to collar a shoplifter is easy work?) But this particular shoplifter winds up jumping off a local bridge, and Kinsey's gut tells her there's a lot more to the shoplifter's story than overwhelming guilt at being caught.

The story moves on in alternating points of view as each of the main characters is introduced-- a man who, bereft at the loss of his fiancée, wants answers; a straying husband who plays by his own rules; a dirty cop who believes he'll never get caught; a wife whose life is about to implode; and seemingly at the very center of the web, a baleful gangster and a professional shoplifting ring.

Professional shoplifting rings don't cross the minds of most citizens, but they do exist, as anyone who's worked retail for any length of time can tell you. My personal favorite, although they weren't part of a ring, were the elderly couple who came into my store almost everyday. The wife was confined to a wheelchair, and her husband would push her throughout the store, stopping to chat and laugh with the clerks. Most of us were shocked when they were arrested and we learned that the wife was sitting on top of a big empty compartment that they were filling each and every time they came in the store. Once something like that happens, you begin looking at customers in a very different way!

Even if you don't have personal experience of shoplifters, this will be an interesting part of the plot as Kinsey investigates and uncovers more and more facts about it.

I also appreciated the alternating points of view in the book. There is a strong cast of characters in V is for Vengeance, and Grafton's letting them tell their own stories really lets readers get to know them and form their own opinions about each one. Don't set too much store on your impressions, though. Grafton throws in a few twists so you may not know the characters as well as you think.

A strong, well-paced plot and interesting characters made sure that I enjoyed this book from beginning to end. I may have come late to Kinsey's party (having read only three of the books), but at least I've finally arrived!