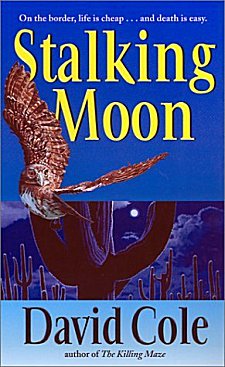 First Line: One of my cell phones rang at 4:15 in the morning.

As a brilliant computer hacker, Laura Winslow knows of many ways to fly beneath the radar to avoid detection. Through the years, she's used many of those ways herself. As a youthful member of A.I.M. (American Indian Movement), she did things that have the government still searching for her. Her ex-husband stole their daughter, and Laura is still trying to find her, but at least she's overcome her addiction to ritalin. The smoother her life is, the more she'll be able to concentrate on what matters most to her.

This part-Hopi hacker-investigator has been hiding out in the Arizona desert, but her latest job puts her too close to the Mexican border at the same time that a large-scale illegal border crossing is taking place. Laura is now in the hands of federal agents who will expose and arrest her unless she agrees to help the government in uncovering a massive operation trafficking in human lives. Innocent women have already died in the Sonoran Desert of Arizona and Mexico, and unless Laura can discover the truth in a labyrinth of internet chat rooms and cover-ups, she may join them.

I enjoy this series and always recommend it to other crime fiction readers who enjoy mysteries in that mid-range between cozy and hard-boiled. Author David Cole imbues his books with a strong sense of place-- not through painting word pictures of breathtaking scenery, but through plots that deal with issues that are crucial to the area. His main character, Laura Winslow, is also one of the best in the genre.

Superficially, Laura is a character that many readers would prefer to ignore. Her background can easily make them uncomfortable. Laura's history-- and her growth and transformation-- is exactly what makes her such a wonderful character.

She's hiding from the federal government due to her participation in the American Indian Movement as a teenager and young woman. For the most part, she was following in her ex-husband's footsteps and not any real threat to life, liberty and the pursuit of the American Way. In a very real sense, her participation has already cost her her daughter.

Laura also became addicted to ritalin, and drug addicts also make most people uneasy. In the first book in this series, Butterfly Lost, she is still addicted and fighting it, which made her a very jumpy and unpredictable person. By this third book in the series, she's succeeded in kicking her habit, but she can still be unpredictable. Laura Winslow is a woman who evolves from book to book. She grows, she changes, she becomes stronger and more focused. It's this transformation of a character that has me hooked on these books. Laura is becoming a person who's willing to take control and stop hiding. No matter how conflicted she is, Laura always opts for doing what's right.

From the border towns of Nogales to the city of Tucson, Cole leads us through a maze of clues to the people smuggling women into the U.S.-- and the futility that comes with catching them. It's every bit the same as cutting the head off a hydra.

David Cole is a very talented storyteller and the creator of a marvelous character in Laura Winslow. It would thrill me to bits if more readers would discover-- and appreciate-- his books like I do.