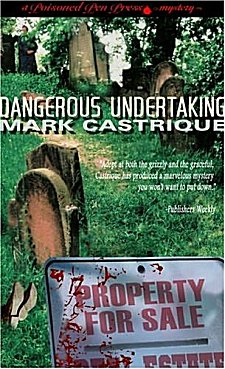 Former Charlotte policeman Barry Clayton has a new job that he doesn't want. With his father caught in the talons of Alzheimer's, Barry quits the Charlotte police force and returns to the small mountain community of Gainesboro, North Carolina, to take over the role of town undertaker.

Almost immediately, his job turns deadly. At the graveside service for an elderly woman, her grief-stricken grandson kills his family and turns the gun on Barry. "Take a message to my grandmother," Dallas Willard shouts. "Tell her they tried to take the land. Tell her I love her." The shotgun blast hits Barry in the shoulder. His wounds being seen to by the woman he loves, Barry begins to search for Dallas and the reason for Dallas's actions.

Fortunately Barry's irreverent humor and independence have earned him the friendship of the county sheriff, and he is a former policeman after all, so Sheriff Tommy Lee Wadkins is happy to have the help. When a second shooting occurs and Dallas Willard's body is found in a quarry pond, Barry realizes he could be the next victim on the killer's list.

Already a fan of the author through his Sam Blackman series, I looked forward to this first book in his "Buryin' Barry" series. I wasn't disappointed. There is a very strong sense of both the place and its people in Dangerous Undertaking which adds richness to the story. How a family deals with Alzheimer's is also honestly and sensitively dealt with.

Although I also come from a small town, I wasn't aware of how a funeral home can be part of the fabric of a place-- probably because the funeral director in my hometown was more a figure of fun. (All I have to do is think "cats and Cadillacs" to start grinning.)

Another bonus in the book is Barry's sense of humor, which led me to laugh out loud several times. Here's a sample:

Sheriff Tommy Lee Wadkins smiled and spoke out of the corner of his mouth. "Cover me."

"Cover you?" My voice cracked through wilted vocal cords. "I'm a damn undertaker. The only thing I can cover you with is dirt."

The mystery, involving land prices and greed, takes some unexpected twists and turns along the way, which keeps it interesting. In the end, however, it's the strong cast of characters that kept me savoring the pages all the way to the end.

I'm looking forward to my next visit with Barry Clayton.