Scene of the Crime with Author Judy Clemens!

Have you ever read a mystery series and wondered how the main character could call him- or herself gainfully employed because every minute was spent nosing into murders? I have, and one of the reasons why I like Judy Clemens' Stella Crown series is because you don't find Stella doing that. Stella is a dairy farmer. Her days have a timetable, and any sleuthing Stella does is done when her herd doesn't need her attention. That's not the only reason why I like the books, of course, and if you've never had the pleasure of reading about Stella, I seriously hope you take the time to do so!

Judy also writes the Grim Reaper series which features Casey Maldonado, who has been devastated by the deaths of her husband and infant son in a car crash that she alone survived. Casey has taken to traveling, accompanied by Death-- whom she alone can see. Sounds intriguing, doesn't it? I'm looking forward to getting my hands on the first book in this series!

If you'd like to know more about Judy and her books, here are a few links for you: 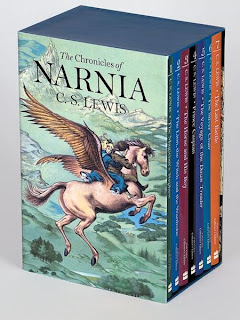 As a kid I was a huge Chronicles of Narnia fan -- I read through the series at least seven times.  My brother even bought me a Map of Narnia that I had on my bedroom wall for years.  One of the special things about those books is that at each age when I read them they meant something different.  As a younger child, they were pure fantasy, with great characters and tense plots.  As I got older I began to see the deeper meaning and symbolism behind the stories, while still enjoying the fantastical part of the novels.  I love the books, and am slowly reading through them again with my own kids, although there is a big difference between Lewis's prose and that of modern writers for young people.

As far as mysteries, I am in the minority, I guess, in that I never read Nancy Drew.  I read some Agatha Christie as a kid, and a couple Trixie Beldens, but it wasn't until college that I really fell in love with crime fiction.  I was on choir tour for Hesston College, and needed things to read on the bus as we traveled out west.  I grabbed Have His Carcase by Dorothy L. Sayers, and I was gone!  At each stop, in each state, I would hunt down a bookstore and get another one of her books.  I bought practically the entire series on that one trip.  And that was the beginning of my love affair with mysteries.

Is reading an "associated commitment?"  ; )  Because that's one of my favorite things to do.  But I also love to cook and bake -- especially finding healthier ways to cook old-time favorites (except perhaps cake--  I LOVE chocolate cake and can't really stand all those "healthy" ways of making it!).  I also love watching movies and TV series.  Some of my favorites of those come from the BBC, such as Life on Mars, Lark Rise to Candleford, and MI-5.  I spend a lot of time with my family, and some days it seems like most of that time is spent transporting kids to soccer games or practices!   I also enjoy being involved in our church, where I am an elder, a Sunday School teacher, a song leader, and a youth sponsor.

Part of the reason I like where I live is because there's not a whole lot around here.  ; )  I used to live in the suburbs of Philly, and couldn't breathe there.  Here there is space and farmland and wide sky.  I love that.   That said, there are some fun things for visitors who might not like all that wide open space!  Some folks at our church have a corn maze and cider press in the fall, along with hay rides and pumpkins.  That's fun.  There is a Butterfly House in Whitehouse, which is about 50 minutes from me, and that's lovely.  My mom and I went there with my kids last month and took about a zillion pictures.  About two miles from my house is an old quarry where people come to learn to scuba dive.  And we're about an hour from the Toledo Mudhens!  Basically it's a quiet life here, which I love.  I enjoy visiting the city, but prefer rural home base!

I've been told different times that I look something like Justine Bateman, and I liked her character in Family Ties, so maybe I would pick her.  I've never thought about this before!  Hmm.  I'll have to consider it...  More often I get asked who should play my characters.  Hilary Swank would be someone I could see playing either Stella or Casey.  Death could possibly be played by multiple people.  That would be interesting to see who a studio would pick for that.

Wow, that's a hard one.  One favorite of mine is Amelia Peabody from Elizabeth Peters' Egyptology series.  I pretty much love all of Harlan Coben's books, especially the Myron Bolitar ones, but my favorite character there would be Win, rather than Myron (sorry, Myron!).  But my all-time favorite is Mrs. Pollifax, from Dorothy Gilman's series under that name.  I've read all of those books multiple times, and I love them each read-through. 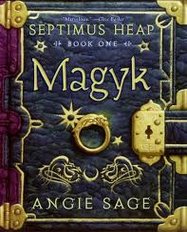 I wish I had written the Septimus Heap books by Angie Sage.  They are middle-grade fantasy books, and I love both her writing and her stories.  The whole idea of the books is so fun and imaginative, with their magic, their likable characters, and their creepy villains.  The books inspire me both as a writer and a reader.  Love them.

You know, I don't remember those specifics!  I do remember being VERY excited (but I was also tired, since I had both a five- and three-year-old).  Opening the first box of books from my publisher was so amazing.  After many years of working to get published, it was so very satisfying.  Even on book number nine this summer, it was still a thrill to open the box and see the actual thing for the first time!  I still will go into bookstores and look for my books on the shelves.  And it's still so fun to see them there!  I can't imagine that will ever get old.

Yes, love those Parnell videos!  At the Buckeye Book Fair here in Ohio last year a woman came up to me and said my character Stella had inspired her to get a tattoo!  She showed it to me, and it was beautiful.  She said she was having a hard time in her life at that time, and she began reading my books, and they helped her.  It's pretty amazing to think my books could affect someone that much!  Very humbling, and affirming.

I don't yet have an e-reader.  I still love regular books!  But I was on a trip recently, and thought it would have been nice to have an e-reader for traveling instead of lugging heavy books around.  I don't know -- I've never actually tried reading on one, so I guess I'd have to do that before really having an opinion.  As for how they will affect me as an author -- the biggest thing will be royalty percentages, I think.  Publishers tend to give lower percentages for ebooks and ebooks are less expensive than regular books, so it could have a financial effect.  But as for actually reading, I think people will always want stories, so I don't think writers will go out of business!  : ) I guess we'll have to see!

Thank you so much for spending this time with us, Judy. We really appreciate the chance to get to know you a little better.


May your book sales do nothing but increase!