Ever since I found out about the R.E.A.D. program, I've been a believer.

R.E.A.D. has a very simple formula: team a child with a dog, and have that child read books to the dog. Is it any wonder that, after reading to a loving, non-judgmental canine, the child's reading ability gets stronger? If you need any more proof, just read Lily's post about being a R.E.A.D. dog!

The R.E.A.D. program can be found throughout the United States, Canada, and the United Kingdom, and I was thrilled when I discovered that one of my favorite cozy mystery writers, Mary Jane Maffini, happens to be the owner of two therapy dogs. You've already heard from Lily, but Daisy insisted that she be included, too. She works just as hard as Lily, you know!

In honor of the R.E.A.D. program (and of the hard work of Daisy and Lily), I'm holding a giveaway with a twist. Here are the details:


Organize Your Corpses
The Cluttered Corpse
Death Loves a Messy Desk
Closet Confidential
The Busy Woman's Guide to Murder
Just fill out the entry form below for your chance to win your choice of one of the books in this fun series! 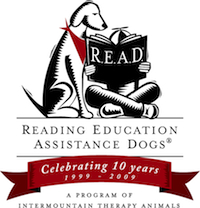 In addition, I will be making a donation to the R.E.A.D. program for every comment left on this post, so don't be shy-- Announce your presence and know that money will be going to a very good cause!
Don't delay! Choose which book you'd like to win, fill out the entry form below, and leave a comment! (One comment per person.)
by Cathy at Thursday, November 03, 2011