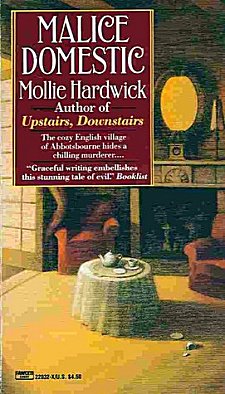 Time does indeed heal all wounds. After a disastrous love affair, Doran Fairweather moved to a tiny village in Kent and set up her antiques business in a neighboring town. Now her business is doing well, and her low-key romance with the vicar definitely makes Doran's heart beat faster. However, when the singularly unpleasant Mr. Mumbray moves to town, he has the tendency to make the collective village blood pressure skyrocket. Residents flee in the middle of the night, they sicken, and... they begin to die. Unwilling to stand idly by while her beloved village and her friends are under attack, Doran is determined to find out what exactly is going on.

If you're in the mood for a light, well-written mystery filled with wonderful characters and set in a quintessential English village, Malice Domestic may well be your cup of Earl Grey.

Doran Fairweather is a young woman who cares deeply about her friends and acquaintances. She is incapable of inaction, even when her constant forays into the village to ask questions puts her at the top of the police suspect list. Her romance with the Reverend Rodney Chelmarsh would be sheer poetry if it weren't for Rodney's evil-tempered young daughter. Confined to a wheelchair, Helena has been indulged and spoiled-- much to the dismay of all those around her.

Amongst a stellar cast of characters, Hardwick has inserted a truly evil man, Leonard Mumbray. What Mumbray intentionally does made my blood run cold, but it wasn't his crimes or the identity of the killer that made this book so enjoyable that I'd ordered the second in the series before I'd even reached the halfway mark in Malice Domestic. It was the marvelous cast of characters and their interactions. Hardwick created a village of people about whom I grew to care deeply. These characters are not static. As things happen, they grow and change, and with certain decisions being made about the obnoxious Helena at the end of the book, I'm very interested in seeing what happens in the next book.

If you're in the mood for a bit of antiques, a dash of romance, a soupçon of evil and buckets of character, Mollie Hardwick's Malice Domestic may be your recipe for an enjoyable afternoon of reading.