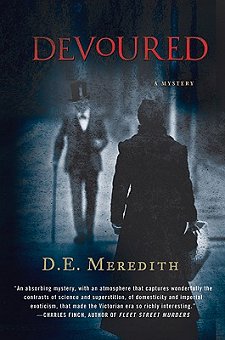 First Line: The door creaked open as the maid stepped into the room.

The year is 1856, and the London elite find themselves gripped by the craze of collecting specimens. Expeditions are being sent to far-off jungles to gather the known and the unknown. Combine this addiction with the new theories of evolution that are changing the ways people think about themselves and the world around them, and a potentially explosive situation is being created.

Glamorous Lady Bessingham prides herself on being ahead of all her friends in anything from fashion to the latest scientific discoveries. She's the recipient of letters from Benjamin Broderig, a young man just recently returned from an expedition to Borneo. When Lady Bessingham is found murdered and those letters stolen, Medical Jurisprudence adviser Adolphus Hatton and his assistant Albert Roumande, are called in to examine the crime scene. The new world of forensics and autopsy examinations are viewed with suspicion, but Scotland Yard has found Hatton and Roumande capable of very useful observations. However, they've barely begun when one murder turns into a series of them-- all with those letters at the heart.

I can always be tempted with a good historical mystery, especially one featuring the beginnings of forensic science. In Devoured, Meredith's setting and time period are extremely well done. I felt as though I were right in the middle of Victorian London, and the author's building tension through a creepy, gloomy atmosphere was quite effective. Unfortunately, too many other elements were uneven and confusing.

Although we're told what marvels Hatton and Roumande are at interpreting crime scenes, we see very little of it. If you're a CSI fan and want to read a book with quite a bit of detail about your favorite science, you're not going to find it here. In addition, Meredith gives just enough information about her two main characters to make them intriguing. Very little about the two, their backgrounds or motivations, is actually shared with us, which made it difficult to empathize with either of them.

As I read, I kept feeling that this book would have benefited from more editing. The narrative often felt very disjointed-- a character would be doing something and I'd wonder "How did we get here?" A secondary thread involving the murders of prepubescent girls really wasn't necessary; it deflected attention away from the "Borneo letters" murders and would have been better used as the focus of a separate book. While I'm on the topic of those letters, people are being murdered left and right because of them, but guess what? The letter writer himself is in London. Why were no attempts made on his life?

Although I did find this book a bit muddled, I can also see that, as a series, it does show considerable promise. It will be interesting to see what Meredith does with the second book in the series, The Devil's Ribbon.