Hounding the Pavement by Judi McCoy 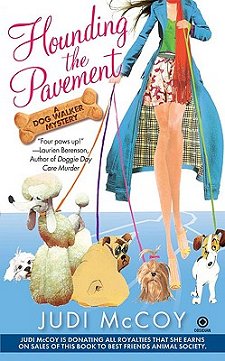 Ellie Engleman is the new dog walker on Manhattan's Upper East Side, and she has an advantage that her competitors don't: she can hear what her canine clientele is thinking. When the owner of one of her charges is murdered and the dog disappears, at first Ellie is concerned solely with the missing dog's safety. It doesn't take long, however, for her to start looking for the killer.

Not being familiar with someplace like New York City, I had no idea how well-paid dog walkers can be-- or how cutthroat their business when faced with unscrupulous competitors. From a business standpoint alone, I enjoyed this book, but there are many other things to like about Hounding the Pavement.

I liked Ellie. She's different from many amateur sleuths because she does not watch police or crime programs on television, so she's really a novice at detecting. I also liked how much she cared for the dogs in her charge, and I liked the conversations she held with them because each dog had a different personality and sometimes focused on some rather strange things. If any dog owner/lover thinks about it, holding conversations with canines isn't unusual. The closer you are to the animal, the easier it is to decipher their thought processes. Having Ellie learning clues from her charges really didn't take me out of my comfort zone. (I guess I've conversed with too many dogs myself.)

Author Judi McCoy had me feeling at home walking the streets of Manhattan, and Ellie's friends were an interesting bunch. As far as the identity of the killer goes, there were two main "bad guys," which narrowed down the field, but what was more surprising were the reasons behind the murder and the disappearance of the dog.

There's only one character I wish would have a major makeover before the next book in the series: Ellie's mother. The woman has wealth-- mainly through her many marriages-- and she's one of these women who "have standards" and thinks what Ellie does for a living is beneath her. Anyone who's read my blog for any length of time knows that I do not care for interfering mothers (or mothers-in-law for that matter).

To take my mind off Mommy Dearest, Ellie has a hot romantic interest in the lead detective on the case, Sam Ryder, who learns that, although Ellie may not watch CSI, she's got an uncanny ability to ferret out information and think things through to their logical conclusions. The interest between the two eventually turns very steamy and a bit graphic, so if that isn't your cup of tea, keep that in mind.

As for me, I wiped the steam off my glasses and enjoyed the characters, the banter, the humor, the streets of Manhattan, and-- of course-- the dogs. Judi McCoy has written an engaging book, and I look forward to reading the next in the series.