A Deadly Cliché by Ellery Adams 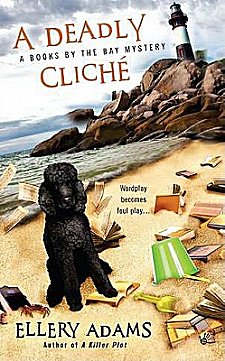 While walking with her standard poodle, Captain Haviland, along the beach, Olivia Limoges finds a body buried in the sand. Could this be connected to a series of strange burglaries in the Oyster Bay, North Carolina area? At the scene of each burglary, the thieves set up bizarre tableaux: a stick of butter with a knife cutting through it, a doll with a spoon in its mouth, an incomplete deck of cards.... Suddenly Olivia understands that each scene represents a cliché, and what better group of people to decode this sort of clue than her Bayside Book Writers?

There's no sophomore slump in the Books by the Bay cozy mystery series. A Deadly Cliché is even stronger than the first. Although the characters understand that the burglars are leaving clues behind, understanding the why takes a while to unfold, and the thieves' identities even longer. Part of the reason for this is due to the fact that there's a subplot in play: Olivia has been given information that her father-- long believed to be drowned at sea-- may actually be alive, and finding him is more important to her than unmasking the thieves.

This subplot adds depth to the character of Olivia. For years she's kept a protective shell around herself, one that kept her aloof and almost entirely unapproachable in the first book, A Killer Plot. As she tells another character, she is working on "defrosting," and learning about her father is going to help her do just that. It's also going to add to future books in the series.

Another bonus to this series is being able to watch a writers group in action. For anyone who's interested in the craft, it's useful to see how the group interacts, to see how they critique each other's work, and to understand how they help one another.

This series is pretty much Olivia's show, and although I love seeing a wealthy person being a force for good in her community, and I enjoy watching her become more approachable and willing to trust, I'm hoping that more of the secondary characters-- particularly those in the writers group-- will come to the fore and share more of the limelight with Olivia.

As in the first book, Captain Haviland continues to be an excellent canine sidekick, even if he does seem to eat nothing but gourmet food. He doesn't have any super powers; he's just a well-trained, well-behaved dog that loves his human. You can't ask for more than that.

However, I can and will ask for more than that. What do I ask for? More books in this series, please!