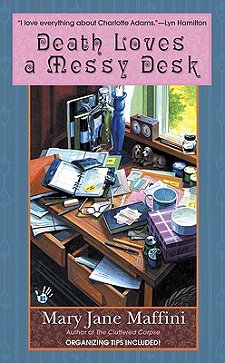 First Line: As the flash went off in my face, I yelped and dove for cover.

Despite professional organizer Charlotte Adams' rather high profile in a couple of recent murders, she's got a waiting list of customers who are in desperate need of her expertise. When there's a cancellation, Charlotte agrees to meet a woman who has a problem with a co-worker's extremely messy desk. In no time flat, the cluttered co-worker goes missing, and Charlotte once again is at the mercy of media cameramen as she tries to solve the mystery.

I have to admit that those cameramen are one of the reasons why I enjoy this series. Charlotte and cameras go together as well as pancakes and jalapeños. If there's any way to get an unflattering photo of her to show to all the viewers, those cameramen will, and it's become a running joke throughout the series.

Another reason why I like this series is that Maffini doesn't bury the organizing under the murder. Each chapter begins with an organizing tip, and Charlotte comes up with a brilliant plan to streamline an office and make everyone more productive.

Charlotte does have her faults. One character describes her (to her face) as "a bit bossy, a bit uptight, kind of vain about your appearance. Maybe shallow."  Charlotte is all those things... well, maybe not the shallow part... but she is still a likable character and one worth following through a series. She's so earnest that I just have to root for her through all her pratfalls and triumphs.

Although the behavior of one of the office workers didn't fool me, I still didn't figure out what was going on. I look forward to the next book in the series where I hope I'll get to see Truffle and Sweet Marie train to be therapy dogs.