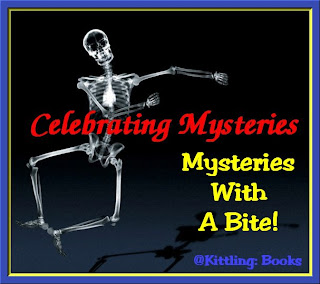 September is Responsible Dog Ownership Month for the American Kennel Club and thousands of dog owners across the country. With that in mind, I thought I'd take a look to see how many mystery series feature some sort of canine companion. Quite a few, as it turns out!

So... throughout September I'll be treating you to some of the best dogs in crime fiction. They may work side by side with their human counterparts, they may provide solace during a rough investigation, or they may even provide monetary support for their two-legged friends. Any way you look at it, I intend to have a howling good time this month! Let's get started with four authors whose main characters all work with dogs.


Sue Henry has lived in Alaska for over twenty-five years. Based in Anchorage where she teaches writing at the University of Alaska, she brings history, Alaskan lore, and the beauty of the landscape to her award-winning books.

One of the two series she writes features Jessie Arnold, a dog sled racer, and Sergeant Alex Jensen, an Alaska state trooper. There are currently thirteen books in the Jessie Arnold series, the first three of which are: Murder on the Iditarod Trail (1991), Termination Dust (1995), and Sleeping Lady (1996). (I know you can't tell when there are pauses, but there was one just now as I put in a request for a copy of Murder on the Iditarod Trail.) 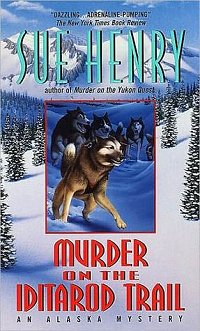 Here's what the School Library Journal had to say about the first book in the series:

Contending with the elements in running the grueling Iditarod from Anchorage to Nome is difficult enough, but when three sledders are killed, the two-week race truly becomes a survival test. The cruel beauty of snow, ice, and mountains is breathtakingly captured and adds to the adventure and excitement of Henry's story. A little romance between a Canadian Mountie and one of the mushers produces an irresistible tale."


Gerald Hammond was an architect for over thirty years before taking retirement in 1982. He now lives in Scotland with his family, where he's written over thirty mysteries. He divides his time between shooting, fishing and writing.

One of the series he's written features John Cunningham, a hunting dog breeder in Scotland. There are twelve books in the series, the first three of which are: Dog in the Dark (1989), Whose Dog Are You? (1991), and Doghouse (1992). Due to a high recommendation from a trusted source, I have the first book in the series sitting on my to-be-read shelves. 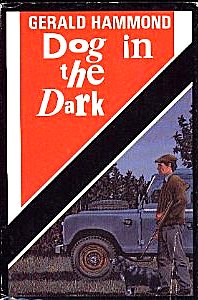 From the dust jacket:

[Dog in the Dark] introduces Captain John Cunningham, a veteran of the Falklands war who has recently been invalided out of the army. Deciding to set up in civilian life as a trainer and breeder of gun dogs-- a passion he can also earn a little money at-- he takes in one Isobel Kitts as a partner, a trained vet whose skill is matched, perhaps too strongly, by her enthusiasm. Dog-breeding proves to be a ruthlessly competitive business-- and a hazardous one, as Cunningham learns when one of the other breeders is found murdered. Worse yet, it is soon discovered that the weapon was a product of his own workshop."

Lee Charles Kelley was a DJ in radio for many years and also did some acting before getting a dog in 1989. He fell in love with all things canine and eventually became a professional dog trainer.

His mystery series features Jack Field, a former NYPD detective who retired to run a kennel in Maine. There are six book in the series, and the first three are: A Nose for Murder (2003), Murder Unleashed (2003), and To Collar a Killer (2004). 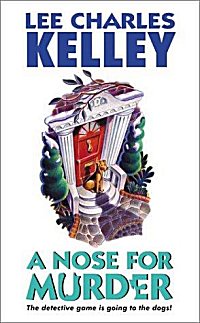 Here's a brief synopsis of the first book in the series:

Jack's a dog trainer and a behavioral specialist -- not to mention the 'main squeeze' of smart and sexy, part-time medical examiner, Jamie Cutter. That's why he's standing in a secluded cabin by a lake on an icy December evening, with Allison DeMarco lying dead on her kitchen floor, and her high-strung Airedale, Ginger, going ape in the corner. You can't teach an old dog -- or cop -- new tricks, so this homicide has Jack hooked ... especially since poor Ginger seems to be the only witness! In a world of misbehaving mutts and pesky purebreeds, a killer may be waiting to make Jack, Jamie, and their puppy-pals roll over and play dead."

Jodi McCoy and her husband live on Virginia's eastern shore. Retired from her career as a nationally rated women's gymnastic judge, she now writes full time and also teaches aspiring authors and speaks at conferences around the country.

Her mystery series features Manhattanite Ellie Engleman, a professional dog walker who communicates psychically with dogs. Ellie's adopted Yorkie, Rudy, is based on Judi's own dog who died in 2009. The series has five books, with the sixth due to be released in March 2012. The first three are: Hounding the Pavement (2008), Heir of the Dog (2009), and Death in Show (2010). 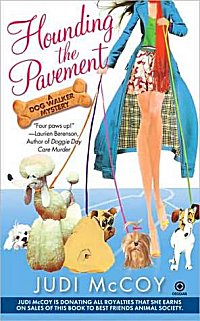 Let's see what Publishers Weekly had to say about the book that's almost at the top of my next-in-line short stack:

Cozy fans will savor this charming paranormal mystery series opener from author McCoy. Recently divorced Ellie Engleman, ready for a fresh start, adopts a Yorkie and discovers she can telepathically communicate with dogs. Naturally, she launches a dog-walking business on Manhattan's posh Upper East Side. On the way to walk prize-winning Bichon Buddy, Ellie discovers the body of his owner, Professor Albright, murdered in his entryway. Buddy is missing and no one, save Ellie, is concerned. Sexy, annoying NYPD Detective Sam Ryder considers Ellie a prime suspect, but that doesn't stop her from searching for Buddy, hoping that finding the dog will lead her to the killer. Somehow managing to avoid every talking animal mystery cliché, McCoy fills this delightful story with humor, quirky characters and delicious hints of romance."

What do you think? Are you ready to sink your teeth into one of these series? I hope so! Oh... and if the title of this post, "Works With Dogs," reminded you of something, perhaps it was a phrase like...oh, I dunno... "Dances With Wolves"? So many of the titles in these series are so good that I think it's done something to me!