A Case of Hometown Blues by W.S. Gager 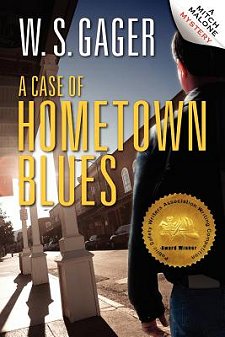 First Line: "Hey, Malone, how can we expect to get a Pulitzer in this backwater?"

Mitch Malone knew it was a mistake to let his boss talk him into a series of seminars at the newspaper offices of his hometown in Flatville, Michigan. The first day isn't even over when he lets one of the local reporters get under his skin. Before he knows it, Mitch has agreed to a bet, and now he has to find a big story in this small town.

At a bar that evening to drown his sorrows, Mitch stumbles into his own high school reunion-- and inadvertently, into his story. The next day, the former classmate he had been talking to is found murdered, and Mitch needs to find the killer before local law enforcement convinces everyone that it's him.

Gager's depiction of a small town is spot on, and her pacing is swift and sure. In fact, the events leading to the ending move fast and furiously. Although one character in particular already had me mentally giving him the hairy eyeball early on, the author did a very good job at guiding me away from him so that I was surprised by book's end.

I had a few problems with some of the secondary characters. At first, some of them appeared very stereotypical, and I was put off. However, all their motivations were revealed in due course, and I felt differently about them.

My favorite secondary character was teenager "Scoop" Bradshaw, and I liked how Mitch was willing to help her learn more about journalism. Scoop was bright and fearless, and I wish there could have been more of her in the book. As for Mitch himself, I liked his instincts, his quick thinking, and the information he imparted during his seminars. I did find him more than a bit twitchy and insecure, though. He always seemed to be telling me how he felt about something, and I'm just not used to males doing that.

I did enjoy this fast paced book about a journalist facing a return to the hometown he never wanted to see again. His quick thinking got him out of a murder charge, and going back home again made him face things he'd been avoiding. It was a painful trip, but Mitch proved that it can be done.