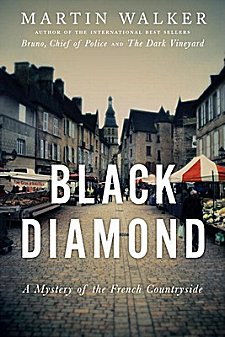 First Line: There were not many times that Bruno Courrèges disliked his job.

In this third outing with Bruno Courrèges, chief of police of the village of St. Denis in southwestern France, it's time to vote for mayor, and all the candidates are buzzing and swarming. But politics isn't the only thing that's rearing its ugly head. There are attacks on Vietnamese vendors, arson at a local Asian restaurant, and subpar Chinese truffles showing up in shipments from a local market.

When one of Bruno's closest friends-- a noted truffle expert-- is murdered, Bruno's investigation is complicated by the fact that his friend wasn't just an expert on France's multi-million dollar truffle industry, he was also a former high-profile intelligence officer. Will Bruno's knowledge of the inhabitants of the area be able to help him solve a crime like this?

I read the first book in this series (Bruno, Chief of Police) not long ago, and I fell in love with its charm, its wit, and its depiction of a place and its people. When I got the chance to read the newest entry in the series, I decided that this was going to be one more instance of not reading a series in order. Did not reading that second book throw me off stride? Not at all. If anything I might have been able to pick up more quickly on the changes in the characters.

Bruno is definitely developing woman troubles-- he'd better be careful!-- and he's even more dedicated to the fine art of cooking than ever. After reading the passages in Black Diamond, I'm almost tempted to get my hands on a copy of Julia Childs' landmark book on French cooking. You see, these passages aren't just about eating wonderful food, they've also got a lot to do with its preparation.

Bruno's exhaustive knowledge of the land and all its people still turns up trumps when it comes to solving crimes, which shows us all that brains, not guns, are the heart of any investigation. (Bruno never wears his firearm.) This village police chief truly loves the people amongst whom he lives, and he wants to take care of them all. If he fails, he is saddened and very much disappointed with himself.

This was a good, tightly plotted mystery with excellent misdirection. Sometimes I think the misdirection really isn't needed because I become so wrapped up in the people and the setting that the villain could parade through the village wearing sleighbells and shooting off fireworks, and I probably wouldn't notice. Very seldom do I ever get so caught up with a setting and its characters. Martin Walker's books happen to be one of those times.