The Ballad of Tom Dooley by Sharyn McCrumb 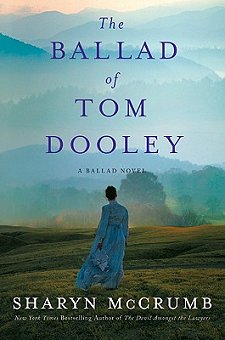 First Line: What did I know about murder cases that a man's life should lie in my hands?

Author Sharyn McCrumb had been approached numerous times to write a story about Tom Dooley, but it's such a well-known tale that she really didn't want to touch it. I'm glad she changed her mind.

If you read this book expecting a long written version of the Kingston Trio's "Tom Dooley", think again. McCrumb did her research, tracking down as many of the original documents and trial transcripts as she could. As she read, certain points in the legend didn't make sense, so she dug deeper. The end result is The Ballad of Tom Dooley.

Tom Dula (Dooley is a corruption of his surname) was a handsome young man who survived the Civil War and was coasting along, subsisting as much as possible by his smile and by playing an occasional song. Ever since their early teens, Tom and Ann Foster loved each other. Ann was a renowned beauty. In order to escape a drunken slattern of a mother and an unending passel of siblings, Ann married James Melton, a man of principle and a bit of property. Ann and Tom were undeterred by Ann's marriage and continued to meet.

Down from the mountains walked Pauline Foster, a relative of Ann's. Pauline was born into poverty, and the Civil War only made it worse. Having had to prostitute herself in order to survive, Pauline caught a venereal disease. Seeking treatment from a local doctor after her journey, she hired on at the Meltons, working for room, board, and a small wage she used to pay her doctor bills. She had no love for Ann, and closely guarded every one of selfish Ann's slights to her. Once she saw what Ann and Tom were up to, she knew just how to plot her revenge.

Oftentimes I do not read author's notes or acknowledgements in a book. I did not make that mistake this time. In her notes and acknowledgements, McCrumb lays out how she did her research and arrived at her conclusions. As McCrumb says, "...I did not invent anything: every conclusion I made stems from a fact in the original trial transcript." She also says that she wishes people wouldn't read this book as if it were an episode of CSI. After all, "It can hardly be a mystery when practically anybody in Wilkes County will tell you on first acquaintance that 'Ann did it.'"

The Ballad of Tom Dooley may not be a mystery, but it is the most chilling portrait of a sociopath that I've ever read. Pauline Foster literally made my blood run cold. Some soft-hearted people may try to blame her behavior on the Civil War. Pauline herself will tell you that she was born the way she is. The Civil War only honed her into a sharp blade.

As I devoured this book, something kept tap, tap, tapping at my subconscious. By book's end, I had the answer. The story of Tom and Ann is in many ways an Appalachian version of Wuthering Heights.  The parallels are uncanny.

Once again, Sharyn McCrumb has woven a story that kept me spellbound.