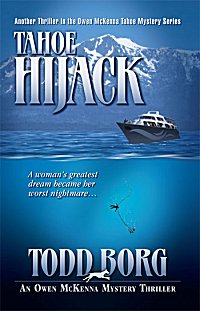 First Line: When the yacht rounded Rubicon Point, the man lifted his flask of Irish whiskey, took a last sip of Celtic fire, and exhaled hard.

A yacht giving tourists a close-up view of Lake Tahoe is hijacked, and the hijacker insists on speaking to private detective Owen McKenna. Before he dies, he tells McKenna the identity of the killer in an unsolved murder case that the P.I. had worked before he left the San Francisco Police Department. As McKenna starts looking into the cold case, he finds himself dealing with a woman in hiding, a militia group, and a quest for treasure that dates back to the Gold Rush.

I'd often meant to sample this series, mainly because of the setting of Lake Tahoe, which I fell in love with on a family vacation when I was ten. Given the opportunity to read the latest book in the series, this stickler for reading-all-series-in-order caved in... and I'm glad I did. Beginning to read Tahoe Hijack is a bit like floor boarding a race car and-- just as you get up to speed-- finding out the steering and brakes don't work. The book is so fast-paced that I could only pick up some of the clues as I read, which left plenty of room for surprises all the way to the end.

The setting of Lake Tahoe certainly didn't disappoint either, but characterization shone even more brightly than the setting and plot. Owen McKenna is just the type of character I like: he cares deeply, to the point where he gets tied up in knots if he feels he's put someone in harm's way. He doesn't take chances just for the sake of an adrenaline rush; he likes to think things through but also thinks well on his feet when the occasion requires it. I also think I've found my favorite canine character: Owen's Harlequin Great Dane, Spot (often referred to as "your largeness").

Did this stickler for order regret starting this series at the end? Not at all. Tahoe Hijack stands alone very well. I really wish I'd gotten to this series earlier, but at least I know I have a treat in store for me as I go back and read the earlier books. If you like beautiful settings, a complex, fast-moving plot, and a main character who lives and breathes on the page, I'd urge you to read Todd Borg's Owen McKenna series.