Scene of the Crime with Author Todd Borg!

I'd heard of the mysteries written by Todd Borg, and they piqued my interest, but-- like altogether too many other things that grab my attention-- I hadn't actually managed to get my hands on a copy of one of his books. Then serendipity struck. Todd emailed me to ask if I'd like to read and review his latest book. I mulled it over for a while. Even though I'm trying not to be such a stickler for reading series in order, it's a very difficult habit to break. However, I had intended to read an Owen McKenna mystery for a long time so I said yes.

Tahoe Hijack turned out to be one of the hits of my 2011 reading year, and you know that I had to ask if he had the time for an interview!

I have to admit that one of the reasons why his books appeal to me so much is their setting. I fell in love with Lake Tahoe when I was ten years old on a memorable family vacation. I've never gone back, but Lake Tahoe's beauty is just as sharp in my mind as it was when I first saw it over forty years ago. Todd and his wife also fell in love with the area, and they were so captured by its spell that they moved there to live.

If you haven't read any of Todd's books, I sincerely hope that you make an effort to do so. A very strong sense of place, wonderful plots, and two characters (Owen and Spot) who can't be beat. If you'd like to know more about the author and his books, please visit the Official Todd Borg website. Now let's get to the interview-- it's a good'un! 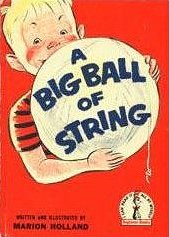 A Big Ball of String by Marion Holland. I was a normal 5-year-old kid, as unimpressed by fancy writing as I was by quantum mechanics. When I discovered the prosaic world of what would happen if you kept every little piece of string you found and wound it into an ever-growing ball, I thought, “Now there's a really cool idea...” It entertained me through dozens of readings. Of course, today it would not be so simple. In the 1950s, the world was held together with string. Today, we have unlimited choices of adhesives. String almost doesn't exist. Today, a big ball of string moves closer to the inscrutable world of quantum mechanics.

Skiing and hiking in the mountains of Tahoe. Great concept. Easy to love. Huge rewards just out the door. But hard to find time to do.

My wife and I will put in the backpack your beverage of choice (I was thinking of a nice bottle of red wine and the long-stemmed glasses with the big bowls that, when you click them together, ring like medieval cathedral church bells). We'll take you on the short hike from above Emerald Bay out along Cascade Lake, where Steinbeck spent a long, inebriated, snowbound winter as a caretaker for some wealthy people, a winter after which he moved back to the temperate coast of Monterey and never came back. There is an expanse of rock next to the top of Cascade Falls where we can sit and gaze down the falls and across Cascade Lake to the huge expanse of Lake Tahoe. We'll toast the mountain snowpack that keeps the falls going until the coming winter snows silence it once again and drive writers indoors to do their work.

Somebody who can do absent-minded (William Hurt?), who can believably walk around looking for the sweater he's wearing. But my life is too boring for a movie. Now Owen McKenna, there's a guy someone could make a movie about. My readers send me emails. Tom Selleck twenty years ago. Clive Owen right now. Ben Affleck in a few years. Makes a bald guy like me wonder. Together, these three guys have enough hair to make Yul Brynner reconsider a wig. I never actually say what Owen looks like. And I absolutely never mention his hair. Yet my readers see him as hirsute from the ears up. Maybe hair is central to readers' imaginations.

Travis McGee. I know, third syllable a capital M followed by a lower case C. Similar Irish, Scottish, and Welsh antecedents to a certain fictional Tahoe guy. The similarity, natch, ends there. But I will admit to influence....

Back to that white knight with the tarnished armor, the loose-jointed beach bum who lives in the barge-type houseboat he won in a poker game. Pick a book. Any one of the 21 books. Yeah, they're a bit dated in the up-on-a-pedestal treatment of women. And their anti-development, save-the-wetlands preaching, while noble, wears thin. But they are still the iconic top of the crime-fiction totem. And John D. MacDonald is still one of the gods that writers worship.

Did I mention taking a bottle of wine out to a certain spectacular waterfall...? 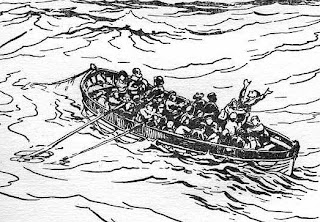 To help showcase my books, I bring a cardboard floor display to my signings. Kind of makes me and my books look special. One day, a white, long-haired, terrier mix took one sniff at my display, lifted his leg, and finally found relief after what may have been a three thousand-mile road trip before his owner let him out at my book signing. We had to airlift in lifeboats.

In the beginning (now) eBooks are very good for authors, including me. But what happens if treeBooks go away is a world I can't stand to contemplate. I'm a 19th Century guy trapped in the 21st Century. I'm only 58, but I still have a secret fondness for dial phones in an era when most people don't know how to use one. I stressed when First Class stamps went from 4 cents to 5 cents, yet now email is bringing about the demise of the Post Office. I remember dime novels in the wire rack at the back of the Thrifty Drugstore. (Okay, they cost 50 cents in those inflated times.) From those little paperbacks with the micro-printing, I learned to appreciate a book made of paper. I can drop it in the dirt or in the water. I can store my post-prandial toothpick in the pages, waiting patiently until a sudden plot twist sends my tongue twitching to find another stuck popcorn hull. I can, at any moment of slackening prose-filled-with-exposition, turn back to the pulpy cover where the girl, hand raised to open mouth, eyes wide with horror at the sight just out of the vision of the reader, reminds me that soon, very soon, the action will resume, and I'll be once again pulled into an alternative universe where there is more excitement, more thrills, more thought-provoking dilemmas, and more justice than in the real world. In a real, paper book, I can flip the pages, scanning, looking for that favorite passage from a previous read. I don't remember the words well enough to do an electronic search. But just watch me. I'll find it in less than 20 seconds. It was about two-thirds through the book, on the verso side, upper third of the page, just in from the gutter, where Marlowe puts his gun against the goon's thigh muscle and says...

No can do any of that with an eBook.


======
No, you certainly can't! Thank you so much for spending this time with my readers and me. We appreciate the chance of getting to know you better. May your book sales do nothing but increase!