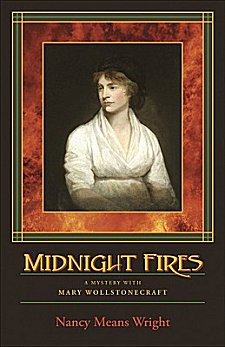 First Line: The crossing from Holyhead to Dublin had been relatively calm, but just as the Irish coast came into view, a contrary wind blew up.

Mary Wollstonecraft is on her way to Mitchelstown Castle in County Cork to be a governess to Lord Kingsborough's daughters. To her, it is humiliating-- a fate most devoutly not to be desired. But with debts to pay and a pack of siblings who constantly turn to her as a source of money, she has no other option. She wants to work out the year she contracted for, to avoid having anyone find out just how much she lied about her qualifications, and to keep out of castle politics by writing a novel. Mary lives to write.

She doesn't even get off the ship before something happens. A young Irish sailor who'd just given her a letter to deliver to someone falls overboard and drowns. Mary could swear that she caught a glimpse of a knife-wielding man standing by the young Irishman, but with the weather being so foul, she must be mistaken.

Life at Mitchelstown Castle is not easy. The oldest daughter can't stand Mary at first, and the unhappy, self-centered Lady Kingsborough finds the proud and stubborn Mary difficult to deal with. When two more people at the caste die, Mary believes those two deaths tie into the death of the sailor, and she won't rest until she finds justice for all three.

At first I found Mary a bit of a handful myself. She is a very passionate young female who has a tendency to eye all the available young men in her vicinity. She spends so much time on visiting the nearby cottagers as well as on her investigation that I wondered where she found the time to teach those young girls anything, but she manages to get everything done. Mary's ability to get right up the noses of those aristocrats dancing attendance on Lord and Lady Kingsborough endeared her to me.

As for solving the mystery before Mary? Not a chance! The list of suspects was so long that I just buckled up and enjoyed the journey. Wright does an excellent job of depicting the people and the era in which they live. Having known a few things about Wollstonecraft (besides the fact that she's the mother of Mary Shelley, the author of Frankenstein), I liked how the author used the facts to create a lively, engaging character that I hope will take center stage in many mysteries to come.