Girl With Skirt of Stars by Jennifer Kitchell 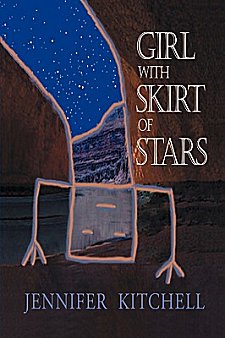 First Line: With low tongue and open mouth, the man began soft as a jazzman to pull off the seduction.

Lilli Chischilly became a lawyer in order to protect her people-- the Navajo-- even to testifying before Congress about Colorado River water usage. Happily married, she is disconcerted when her childhood friend, Jerome Bah, moves back to the reservation and makes contact with her, but she's thrown even further off balance when the president of the Navajo Nation insists she joins Senator Lee and his family on a rafting trip through the Grand Canyon.

The Mormon presidential candidate whom many believe will be the next President of the United States has a reason why he wants Lilli along on the trip. One of his campaign promises is to use new technology to wring every last bit of water and power from Mother Nature. He also wants a legal guarantee to be granted to California for the water rights to the Colorado River. (Which means that-- no matter what happens-- California would get its water regardless of anyone else who needs it.)

Thinking Lilli will be a captive audience, Lee intends to make sure she agrees to this legal guarantee. What neither of them know is that Lee has an enemy who's determined to kill him somewhere along the river down in the depths of the Grand Canyon. Furthermore, the enemy's chances of success are excellent since there are only eleven people traveling on the raft.

Kitchell has a very lyrical writing style that has unexpected touches of humor, as when someone claims another character is "so narrow minded he could applaud with his ears."

The raft trip through the Grand Canyon is extremely suspenseful, since the reader knows there's a killer waiting for them somewhere along the route. A secondary plot line that involves Lilli's childhood friend, Jerome Bah, adds tension between Lilli and Jerome as well as serving as a natural springboard for sharing many Navajo customs and stories.

We could learn much from the Navajo. Tony Hillerman knew this, and Jennifer Kitchell, in her beautifully told story, is following in his footsteps.

May all of you walk in beauty.