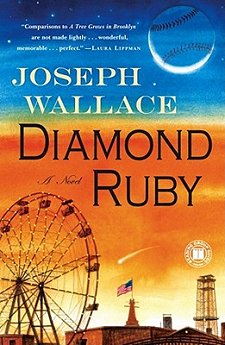 First Line: Ruby Thomas had never seen anything as beautiful as Ebbets Field, with its brick exterior and half-moon windows that reminded her of slices of jelly candy.

Ruby Thomas was seven years old when she visited Ebbets Field. The date was April 5, 1913. It was the first and last time she remembered being happy.

Ruby's mother was an ardent suffragette, and homeschooled her children. Ruby was grateful for that because whenever the neighborhood children would see her, they'd take one look at her long arms and start shouting, "Hey, Monkey Girl!" Life was much easier when she didn't have to deal with those other kids. What those kids didn't know was that her long arms helped her throw a baseball hard, fast and accurately.

When the flu epidemic strikes a few years later, Ruby's family is practically wiped out. At the age of thirteen, she is left in charge of her two young nieces, and she's got to find a way to put a roof over their heads and food on the table. Chucking rocks at squirrels just doesn't cut it. Because she can throw a baseball hard and fast and accurately, she becomes a sideshow attraction at Coney Island, and her fame brings her in contact with such celebrities as Babe Ruth and Jack Dempsey. But in those roaring days of the 1920s, there always seems to be someone with an eye to how they can cheat her out of as much money as possible. Life is an unending struggle, and Ruby has very little to smile about.

Based on the life of Jackie Mitchell, Diamond Ruby brings the era of the teens and twenties to life. As I followed Ruby Thomas, I felt what it was like to grow up poor in the New York City metro area; I felt what it was like to struggle through the flu epidemic; and as each person tried to cheat Ruby and her nieces out of what was rightfully theirs, I felt cheated, too. When Ruby pitched all day at the Coney Island sideshow, my own arm and shoulder ached. Wallace is masterful at putting the reader right inside Ruby's skin.

If I have any quibble at all with this book, it's that it's almost unrelentingly grim. Ruby learned at a very early age that life isn't fair, but as the pages turned, I was so firmly convinced that she was deserving of happiness that I couldn't help but wish that I could watch her experience some.

As an evocation of time and place, as a character study, and as a loving tribute to some forgotten pages of baseball history, Joseph Wallace has hit a home run.