I hope you've been enjoying this month's Native American mystery theme-- I know I have. This week concludes the month of August with three authors whose Native American main characters all follow different career paths. I am well acquainted with two of the authors' books; I have them both listed on my Recommended Mystery Series page. The third author is new to me, but I have the first book in her series sitting on my to-be-read shelves. Let's get started!

David Cole lives part of the year outside Tucson, Arizona. He is a founding member of NativeWeb, Inc., a non-profit corporation offering Internet services and information to Native and Indigenous peoples of the world. Here is what David himself has to say about his writing and the main character of his mystery series:

"My fiction writing has always been politically motivated. Quite frankly, I chose the mystery format because it was a good-selling market, and I could wrap my politics around the plot. And in a very real sense, mysteries are one of the last remaining genres where morality plays a central role. I want "good" to triumph.

Laura Winslow, my central character, is a half-Hopi, one-time-Ritalin-abuser computer hacker, living on the run while battling the demons behind her own anxiety disorder. (In later books) Laura is far more socially interactive and she's also reunited with her daughter. But that doesn't mean my major characters' lives aren't works-in-progress." 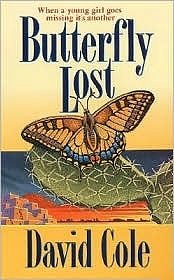 Butterfly Lost is an excellent start to the series. Here is a synopsis:

Hacking onto the electronic trail of people who want to stay lost is Laura Winslow's business. But when an old Hopi commissions Laura to find his granddaughter, she doesn't want any part of his vision of Powakas or Navajo skinwalkers--or anything else that will remind her of her old life as "Kauwanyauma" back on the "rez" in Arizona. The Hopi's granddaughter, however, is one of too many girls recently gone missing, and that Laura can't ignore.


Propelled by her own bad memories, Laura reluctantly begins her search, a trail that leads her into the testosterone-laden rodeo circuit and drops her between the crosshairs of stolen heritage and a quest for ultimate power. This investigation, though, is cutting way too close to her own demons for Laura to handle. Holding body and soul together--and catching a killer--means she must get beyond the angry desire to destroy the past and allow herself to be the woman, and the Hopi, that she's always tried to deny.

Thomas Perry is the author of another series that I highly recommend. He has worked as a park maintenance man, factory laborer, commercial fisherman, university administrator and teacher, and a writer and producer of prime time network television shows.  He lives in Southern California.

His heroine is Jane Whitefield, a Seneca woman who helps innocent people disappear from those who are trying to kill them. She has quite a few tricks up her sleeve, and she's taught me a lot about what I'd have to do if I wanted to vanish. 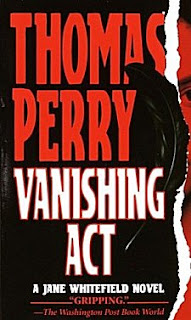 Vanishing Act hooked me, even though I did have a problem or two with the book. Publishers Weekly talks about this first book in the series:

Jane Whitefield, half-white, half-Seneca member of the Wolf clan, helps people disappear-- people like Rhonda Eckerly, fleeing her abusive husband, or Harry Kemple, hoping to stay alive after witnessing a gangland shooting. Like a one-woman witness protection program, Jane has helped both vanish by giving them new identities and new starts at life. Now an alleged new victim has invaded Jane's upstate New York house. John Felker claims that he's a cop-turned-accountant, is being framed as an embezzler and has a contract out on his life. Almost immediately, the men chasing Felker appear, and Jane leads him farther upstate, to a Canadian Indian reservation where he can build a new life. Jane is an original and fascinating creation. She operates outside the law, but with a particular slant born of her distinct character and Seneca heritage. Perry tells her story in a trim and brisk manner, moreover, with plenty of action and suspense.

Sue Owens Wright is an author of both fiction and non-fiction about dogs and writes newspaper columns and magazine articles.

Her mystery series features Elsie "Beanie" MacBean, a freelance writer and member of the Washoe tribe, and her Basset Hound, Cruiser. 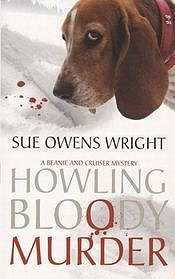 Here's a brief synopsis of the first book in the series:

In Howling Bloody Murder, her first book, Sue Owens Wright introduces half-Washoe Indian Elsie "Beanie" MacBean and her basset hound Cruiser. Land disputes at Lake Tahoe between developers and the Washoe turn deadly, and it's up to Beanie to clear a Tribal Elder's name.

I hope you've enjoyed August's travels into this crime fiction sub-genre. Join me in September when I'll have a brand-new theme to celebrate!