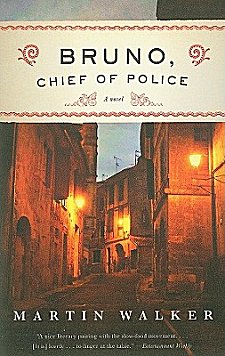 First Line: On a bright May morning, so early that the last of the mist was still lingering low over a bend in the Vézère River, a white van drew to a halt on the ridge that overlooked the small French town.

After a horrifying stint with the U.N. peacekeeping forces in Bosnia, Benoît Courrèges (known as Bruno) has found a home he has come to love very much-- the small village of St. Denis in the Périgord region of southwestern France. There with the help of his friends and his own two hands, he has built a home, and there he knows everyone, and everyone knows him. The mayor of St. Denis also likes and respects Bruno and works with him for the good of the village. Bruno has a gun, but doesn't wear it. He has the power to arrest, but doesn't use it. Instead, he uses his common sense, his knowledge of the people and the area, and his powers of observation to do his job well.

When an elderly North African who fought in the French army is brutally murdered, the sensitive issues of immigration and religion are raised and threaten to tear the village apart. The larger police agencies move in to take command, Paris sends in a hotshot to oversee everything, and Bruno finds that he's going to need every molecule of his ability to see justice done with the minimum amount of damage. Was the old man murdered by Fascist militants... or is there a deeper, more complex motive?

Almost from the opening paragraph, I fell into the embrace of this book. I seldom use the word "charming" because when many other people do, it sounds twee. However, in the case of Bruno, Chief of Police, charming is the only word that fits, and there's nothing derogatory about my usage. The village of St. Denis and its people are so lovingly and meticulously drawn that they came to life as I read. Food played an important role throughout, and Walker described it so well that I often found myself becoming hungry.

In the first few chapters of the book, the action centers on how Bruno and the village work together to escape the clutches of the fine-happy European Union officials who constantly roam the country to ensure that all the hygiene rules are being followed to the letter. This leads to many comic scenes that made me laugh. However, when the old man's murder is discovered, the mood turns serious. France's troubles with increasingly large numbers of Muslim immigrants are well known, and Walker depicts this with honesty and sensitivity.

Throughout the book, Bruno's character is revealed layer by layer-- and what a marvelous character he is! He willingly gives up control to the larger law enforcement agencies, but they all soon learn that his knowledge of the area and its inhabitants are invaluable.

Many times in the mysteries I've read, mayors seem to be a universal target of ridicule and scorn; people who've obtained their positions for the power and prestige and what those two P's can do for them. It was very refreshing to have a mayor play a major role in a book who was intelligent, honest, just, and kind-- and who used his position for the betterment of his community.

Did I know the identity of the murderer before it was revealed? No, and when it was revealed, it was a "head slapper" for me because Walker had planted several clues all along the way. I was too immersed in the village and its inhabitants to see them for what they were.

Will I be visiting Bruno and St. Denis again? Just try to stop me! This is one of the most enjoyable reads I've had so far this year.