The Brink of Fame by Irene Fleming 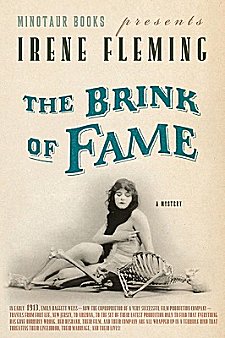 First Line: When Emily Daggett Weiss boarded the Twentieth Century Limited in the spring of 1914, bound for a brief sojourn in the West, one or two old biddies gave her the hairy eye.

Women just don't travel without a chaperone in those days, so Emily gets more than two hairy eyeballs looking in her direction along the route. Her husband has been out in Flagstaff, Arizona, scouting for a location to shoot their next picture and trying to locate some camels to use in the movie. When Emily inquires at the hotel registration desk, she finds out in no short order that her husband has lost their movie company in a poker game-- and he's taken an actress down to Mexico where he can get a divorce and marry the new love of his life. For Emily, the earth has just shifted on its axis.

Left penniless and alone, the former chorus girl is looking for ways to gather up enough money to return East on the train when she meets Holbert Bruns, who's in Flagstaff investigating something for movie mogul Carl Laemmle. Bruns persuades Emily to head West on the train instead. The case he's on is proving difficult, and Bruns thinks Emily can get information that he can't. Once he explains this to Carl Laemmle, Laemmle will be sure to hire her-- and once the case is over, Emily can concentrate on becoming a director of moving pictures.

In California, everything works out as Bruns predicted. Emily is hired as an additional investigator, and Laemmle is very interested in having her direct one of his films-- as soon as she helps locate his missing leading man. Once actor Ross McHenry is found, Emily's career as a director can begin.

Emily is a very winning character, and in trying to overcome her abandonment and in her reactions to various people and places in Los Angeles, she's often quite funny. I enjoy this series-- not only for Emily-- but for all the information about the early days of the film industry. If I have any complaint about The Brink of Fame, it's that most of the secondary characters are two-dimensional and never quite come to life. However, the setting and the main character are strong enough for me to overlook that for the most part.

Do you need to read the first book in the series in order to make sense of this second book? No. There's enough information given where everything makes sense, and not so much that it will spoil the plot if you decide to read the first. Fleming has struck gold in this mystery series that takes place during the early days of the movie industry, and I'm looking forward to reading more of her adventures in Hollywood.