Scene of the Crime with Author E.J. Copperman

Whether it's as E.J. Copperman (as I first met him), or as Jeffrey Cohen, I hope many of you have read one of this man's mysteries. He's a quadruple threat: excellent writing, a fine crime to solve, laugh-out-loud humor, and characters you come to care about. And if you haven't read one of his books, I hope you make an effort to do so. I hate it when folks miss out on such a good thing!

As E.J. Copperman, he writes the Haunted Guesthouse mystery series set in an old Victorian house on the New Jersey shore. As Jeffrey Cohen, he's written two series: one featuring Aaron Tucker, a former investigative reporter and aspiring screenwriter, and the other centered on Elliot Freed, a recently divorced writer and proprietor of an old movie theater. If you'd like more information on his series, you can check out his page at Stop, You're Killing Me!

As far as "checking him out" goes, here are a few more links for you:


Whew! (Honest, Jeff, I'm not studying for my skip tracer's license-- or for a P.I. license, either!)

Okay, it's time to get to the really good part: the interview!

I watch baseball religiously, which is the only thing I do religiously, aside from putting on the Marx Brothers on New Year’s Eve. I play acoustic guitar when nobody’s listening. And I spend time talking to my wife and children, who are the most interesting people I’ve ever met.

To another town. This one’s relatively dull. But we do have a good Greek restaurant.

Aside from my own (one is protective of one’s characters), probably Spenser. Although in all candor, I think he recurred a couple of times too often. Sherlock Holmes, certainly. Superman (What? He dealt with crime!). Encyclopedia Brown.

Groucho, Harpo, Chico and Sometimes Zeppo, by Joe Adamson. A serious professional biography of the Marx Brothers written in perfect irreverent style. I really do wish I could have written it, if only to have done all the interviews the author managed. And it’s a very funny book.

What hadn’t I written? For 20 years, I wrote a slew of screenplays, which met with various degrees of no success. I wrote literally hundreds of articles for newspapers and magazines. I don’t recall ever writing a short story, but I started a novel once and then found out someone had already written it (damn!). My first novel, For Whom the Minivan Rolls, was supposed to be my umpteenth screenplay, and wouldn’t cooperate. It sold in five days. Go figure it out.

I’m embarrassed to say I don’t remember the first time I saw one of my books in a bookstore. My first publisher was a very small company, and distribution was, let’s say, spotty. I do remember the first time I held a copy of my published novel in my hand, and that was special. How did I celebrate? I think I told my wife, and we both took a moment, reflected on how unlikely that all was, and then went back to work. We’re boring.

Yes, I have seen Parnell’s video—he’s a very funny man. (I do, however, refer visitors to the end of this interview, where you can find my music video “It’s Just A Mystery”.)

My funniest book signing experience came on a “Literacy Day” at a large retailer that will remain nameless (Wal-mart). Authors were invited to be assigned a location in a store “close” to the author’s home, and to discuss literacy by reading a children’s book the author did not write to people who were just there for the extra-large package of Huggies. But, being in favor of literacy, I signed up to do my part.

I called the store a few days ahead of time to confirm my impending presence, and was told that I would “love” the promotional plan put into place by “a girl who works here in the store.” Assured that said plan was brilliant and certain to bring hordes of literacy-hungry New Jerseyans to the store, I looked forward to the appearance. 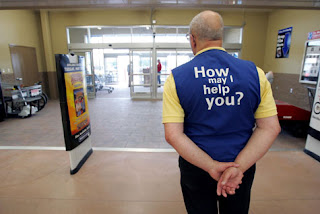 So I showed up on the appointed day, and after being greeted by the greeter (a strange job, but one you’re entitled to), made contact with the representative of the publicist for the children’s book being read, who appeared to be the only person in the store aware of the “Literacy Day” celebration. He informed me that “the girl who works there” was off today, but that she’d at least installed “a great sign” near the entrance trumpeting the brouhaha to come. I said I’d missed the sign on my way in, so he herded me over, all the time insisting it was a fabulous work of promotion, and that I would be impressed beyond all reasonable expectations.

Sure enough, I had walked right by the sign, which was actually quite sizable and heralded the appearance of “New Jersey author Jeff Cohen” (apparently now I had written an entire state), with a picture of said author looking author-ish. The publicist asked me what I thought.

He seemed amazed. “What?”

I pointed to the author picture. “That’s not me.”

Honestly, I couldn’t possibly care less what medium is used for someone to read my work, as long as they read it and I get a royalty (I have two children in college and can’t afford to be altruistic). I think e-books and book books will coexist side-by-side for at least the foreseeable future, and I’ll be happy to be published in either, or both. In other words, I’m not taking sides. I love books and I don’t own an e-reader, so I can’t have an informed opinion.

Thank you so much for spending this time with us, Jeff. May your book sales do nothing but increase!