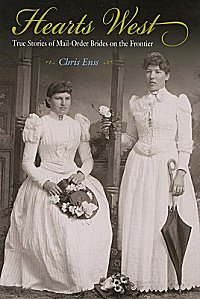 First Line: The promise of boundless acres of land in the West lured hundreds of men away from farms, businesses, and homes in the eastern states as tales of early explorers and fur trappers filtered back from the frontier.

When all those men wound up on the frontier working gold claims, building businesses, and starting farms and ranches, the one thing that was in very short supply was women. It wasn't long until weekly newspapers like the Matrimonial News began circulation in an attempt to match men and women in marital bliss.

The strength in Hearts West lies in the stories of the mail-order brides as they came west to start new lives with total strangers. Some lucky couples found their soul mates. Some found the exact opposite, as in the story of the unlucky young woman who discovered the man she'd come hundreds of miles to marry was one of the men who'd just robbed the stagecoach on which she was traveling.

I've loved reading this author's books in the past, but this one was a bit of a disappointment. There weren't enough actual stories of the mail-order brides and the men they married. There were way too many ads from the Matrimonial News-- to the point where they felt like filler instead of a glimpse into the precursor of online dating. Worst of all, the book needed much closer editing. One chapter had me grinding my teeth due to the nautical errors. (The type of ship referred to is a "scow" not a "scowl"; and a ship only has one "bow"-- not multiple "boughs".) Add those errors to the one in which the character was wearing a skirt that wasn't going to be designed for another sixty years, and I almost stopped reading the book.

However, it's a small book, and I would have missed some excellent history about the brave women who traveled hundreds and thousands of miles to make new lives for themselves.