The Paper Moon by Andrea Camilleri 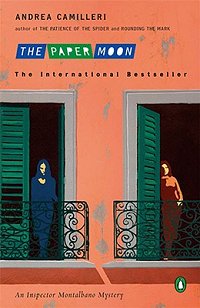 First Line: The alarm rang, as it had done every morning for the past year, at seven-thirty.

The moody Inspector Salvo Montalbano has been plagued by the sense of his own mortality of late. He's trying to dodge all those morbid questions floating around in his mind-- without much success-- so what he needs is a good murder to take his mind off death. This he gets when the body of a man-- shot in the face at point-blank range-- with his pants down around his ankles is found.

Although the first book in the series was rather shaky for me, I am so glad that I continued because this is now one of my absolute favorite series. Montalbano and his team of officers are all gems, and Stephen Sartarelli does a perfect job of translating colloquial dialogue. (By the way, my husband is another huge fan of this series.) How Sartarelli manages to imply regional Sicilian speech and yet keep the meaning completely clear for English speakers is beyond me. The man is a master!

The mystery isn't all that difficult to solve, but that's not the point. The point is being able to watch grumpy Inspector Montalbano distracted by two pretty girls. You know that, sooner or later, the pheromones are going to lose their effect, and the wily Sicilian policeman is going to figure everything out. The joy is in watching him do it.