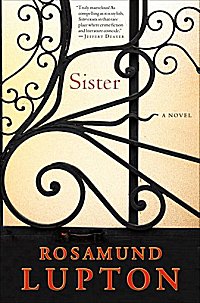 First Line: Dearest Tess, I'd do anything to be with you, right now, right this moment, so I could hold your hand, look at your face, listen to your voice.

When Bee gets a call from her mother saying that her younger sister, Tess, is missing, Bee catches the first flight from New York City to London. At first Bee believes that impulsive Tess is just being herself, but once she has a chance to walk through Tess's flat, Bee knows something is terribly wrong. When Tess's body is found a few days later, police are convinced that it's suicide, but Bee knows it's murder-- and will do everything in her power to provide justice for her beloved sister.

When the book opens, Bee is the tightly reined-in, responsible older sister, and Tess is an impulsive free spirit who sees the beauty in the world around her. The action unfolds as a letter from Bee to her sister, and as we get a clearer picture of the facts, we also see Bee begin to change as one person after another hinders her in trying to find her sister's killer. As the days pass, Bee learns that she didn't know her sister nearly as well as she thought she did-- a lesson that is difficult to learn at any age.

Although everyone else believes that Bee is is denial, with the advantage of Bee's letter to Tess, the reader knows she isn't; that there really is a case to be made for murder. But as Bee slowly loses her iron self control, she tells Tess that she's been keeping something from her-- and the reader is left to wonder just how reliable the older sister is as a narrator. Just what is Bee postponing telling Tess in that letter?

This book satisfies on so many levels. As a thriller, it keeps the reader guessing-- wondering just how unraveled Bee is becoming, wondering what really happened to Tess, wondering if Bee is putting herself in danger-- and as that thriller, everything is deftly plotted, and the pace is quick.

But this book is also an homage to the love one sister has for another. Although Tess is never met as a living person, through Bee's letter to her, we know her every bit as much as her sister does. By telling us about her sister, Bee learns about herself and shares what she learns.

It's true that this book will have even greater meaning to readers who have lost loved ones and experienced not only the aching loss, but the intense soul searching that often accompanies it. However, the true strength and beauty of this book is that it's not just a homage to grief, love and loss, it's also a wonderful character study and a first-rate suspense novel. With one book, Rosamund Lupton has become an author whose books I'll await with great anticipation.