Shadow of the Raven by David Sundstrand 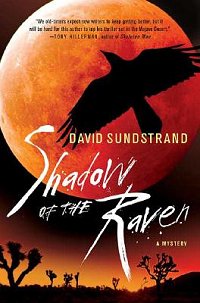 Frank Flynn is an officer of the Bureau of Land Management on the California side of the Mojave Desert. The son of an immigrant Irish railroad man and a half-Mexican, half-Paiute mother, he lives in the caboose that his father brought out to a remote area when the railroad stopped running there.

Although Frank loves teaching people about the desert, its beauty, and the wildlife that lives there, he could do without the thoughtless souls who tear up the fragile ecosystem with their campers and all-terrain vehicles. Moreover, if you really want to make him angry, bring up the topic of rich hunters who hire poverty-stricken Indians to lead them to protected Bighorn rams. The rams are then shot, and their heads taken to adorn the walls of some fancy den or study.

Frank is no stranger to finding human remains in the desert-- people who have gotten lost, run out of water, and died-- but this time the corpse he finds is different. This man has been murdered, left out in the merciless sun to die. Instead of convincing his colleagues of the man's murder, one of the tracks in the sand that Frank finds provides fodder for a running joke. A day or so later when Frank learns that three bikers are looking for a missing buddy, he's positive the dead man is connected to them.

Since the bikers are gaining a reputation for picking fights and maiming-- even killing-- when it suits them, the BLM agent knows that the chances of other people losing their lives is growing by the hour. Since the other law enforcement agencies aren't paying a bit of attention to him, Frank knows it's up to him to stop these men, and if he finds time to save his bighorn sheep, that will be icing on the cake.

I am no stranger to the Mojave Desert, although my treks have kept me to the Arizona side of this desert. It is a land of harsh and uncompromising beauty as long as you take the time to get out of your vehicle and walk a bit. Perhaps its saving grace is that, to most people, it looks so desolate that most of them never venture off the interstate. Since I have a particular fondness for crime fiction set in desert locales, I was happy when I ran across this book.

I'd barely begun to read when it became obvious that the author has a love of and an eye for the desert, too:

Emptiness? Vast, uncluttered, rigorously frugal, but never empty. It was full of shapes and colors and the stillness of open places, a land of illusions, a place where cloud shadows moved across a dreamscape of empty lakes whose dry beds miraculously filled with water when the desert gods emptied the sky in dark torrents, washing the rocks and filling the canyons with ephemeral rivers of brown water.

Frank Flynn is a marvelously realized character in both his relationships to people and to the desert. Sundstrand also does an excellent job in depicting how the various law enforcement agencies-- police, the Department of Fish and Wildlife, and the Bureau of Land Management-- don't always agree on how things should be done... or even on who should do them.

For me, the villains and the plot proved to be a bit weak. The bad guys were just the sort of people I love to despise, but they really didn't rise above the two-dimensional. As for the plot, a few things were mentioned in passing that were all too easily guessed as having something to do with the denouement. Although the author switched around the timing of the two plot threads concerning the rich trophy hunter and the bikers, there really weren't any surprises in what happened.

In books where the characterization and setting aren't so rich and detailed, these weaknesses would make a huge difference. In the case of Shadow of the Raven, I can overlook them a bit as I look for the next book in the series. I most definitely want to read more of Frank Flynn and the Mojave Desert.