Scene of the Crime with Author Juliet Blackwell

As Hailey Lind, Juliet co-wrote a series with her sister which features Annie Kincaid, a reformed art forger now in the faux finishing business-- the Art Lover's mysteries.

Having read the first in the Haunted Home Renovation series, I've fallen in love with the wealth of historic home renovation detail-- and with the voice and character of Mel. It won't be long before I'm sampling the rest of Blackwell's titles!

In the  meantime, here are some other ways to get to know this talented author:

Let's get to the interview. It's a good'un! 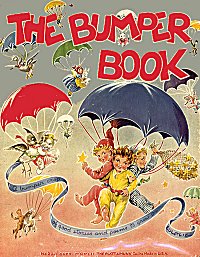 Sitting on my shelf, with pride of place, is the Bumper Book.  The publication date is 1947, at it was in its 22nd printing, so I imagine it was written around the turn of the twentieth century.  It is full of poems and rhymes and short stories with exotic stories referring to “nurses” and “nannies” and “eating with Cook”.  The illustrations are amazing: full-color old fashioned drawings of children in pinafores and lederhosen.

I adored the rhythm of the poems, repeating the rhymes endlessly.  The pictures of children cavorting with overall-clad rabbits in the woods just fascinated me!  I also remember it being SOOOO big – though now I see that while it is oversized, I was clearly much smaller back then ;-)  My fondest childhood memories are of sitting on my mother’s lap while she read the Bumper Book to me – I’m sure it fostered my love of playing with words.

I used to read constantly, and I still try to, but I usually don’t manage more than a chapter or two before bed, and I find that I have so many books on my To-Be-Read pile that it’s threatening to topple over!  Now that I spend so much of my day sitting at my desk writing, I try to balance things out by doing something more active and/or social, like painting, hiking, gardening, and spending time with friends and family.  I have a huge old (undoubtedly haunted) house in Oakland, so I often have friends and relatives staying with me.  It makes life something of a party ;-) Right now I have four people staying with me, and another just arrived last night for a week!

Great question!  Oakland might have a rather negative reputation amongst outsiders, but it’s really a wonderful, historic city, with plenty of sunshine, nice folks, a gorgeous lake right downtown, and some incredible sights.   One of my favorite places is called the Chapel of the Chimes, which is a columbarium designed and built by Julia Morgan, the same architect who designed Hearst’s Castle.  It might sound strange to suggest touring a mausoleum, but it’s an amazing building, full of mosaic and concrete tracery and stained glass and gothic Romanesque arches…I can’t possibly do it justice here, it has to be seen to be believed.  And it’s free and open to the public! Afterward, take a stroll through the historic Mountain View cemetery that adjoins the Chapel – you’ll find incredible crypts full of art, and the best views, hands down, of  Oakland, the bay, San Francisco, and the Golden Gate bridge. This is a hidden gem!

Ooooh, that’s a tough one! A lot of us think about casting a movie made of one of our books, but my OWN life…?  Zoey Deschanel –her goofy side, not the glamorous one—would probably be a great me in my younger years.  More recently, though, I think Kathy Bates might be a better fit ;-)  I think Bates is an incredible actress and really lovely, and I’d love to meet her! I’ve also been told I look like a really plump Elizabeth McGovern…who recently wore some incredible vintage clothing in Downton Abbey, a great mini-series.

My favorite changes with what I’m reading!  I grew up adoring Vicky Bliss, from Elizabeth Peters’s adventure mysteries.  One of my current favorites appears in my friend Sophie Littlefield’s “Bad Day…” series: Stella Hardesty is a fifty-something small town woman with a trashy mouth and a chip on her shoulder – she goes up against some bad men and never loses her sense of humor. And I really enjoyed Evanovich’s Stephanie Plum for the first several books…though I lost interest after a while.  Lee Child’s Reacher is a wonderful, classic, mysterious hero.  Can you tell I’m a Libra?  I have a hard time making choices!


I enjoyed reading If Walls Could Talk because old houses speak to me, too. Please tell us a bit about your favorite old house that you've been in.

It’s usually whatever house I’m working on – maybe I have architectural attention deficit disorder!  But one of my favorites is the house I live in now, which is celebrating its hundred year anniversary this year – I’m planning on giving it a birthday party this August. The house was built by John Hudson Thomas, an architect who worked with bigger names like Julia Morgan and Bernard Maybeck.  The windows are almost all distinct and custom-made; it features broad Moroccan arches and has a vaulted ceiling in the living room.  The lighting fixtures are hand-blown glass from a company that competed with Tiffany Studios at the time. The dining room is hexagonal…there’s a butler’s pantry and a speaking tube and a “maid’s room”…it’s truly a marvel of a house.

I’m only the third owner: the wealthy family who built it lived here for forty-something years and raised a son and daughter – the daughter went on to make movies in very early Hollywood.  The son married and had a daughter who lived here until she was five – that now-grown daughter sent me a letter two weeks after I moved in, asking whether she could come and visit. She told me so many stories about the place!  After her family sold the house, a Polish couple in their forties moved in –they didn’t have the money to keep the place up, so it was neglected for years but they left most of the original woodwork and design intact.

When I moved in the house had been abandoned for two years; there was no heat or hot water, but it was well worth fixing in order to live in such a lovely, graceful home…complete with ghosts!

I had taken an occasional stab at short stories, but never got serious about them – they’re tough!  I had also begun half a dozen women’s fiction-type books, and even a couple of  romances.  But I rarely got past about fifty pages…it wasn’t until I got serious with the mysteries that I ever finished an actual manuscript.  My first mystery was written under a different pen name – Hailey Lind.  Feint of Art, the first in that series, was about an art forger trying to go straight in San Francisco.  I wrote it with my sister, and it started out as a fun exercise, then morphed into an actual manuscript!

It was SUCH a rush to see my first book in a bookstore!  As an avid reader all my life, it was truly a dream to see my own work sitting on the shelf next to other novels I loved.  One of the sad things about being a professional writer is that we tend to get blasé about our latest novel coming out, as though it’s no big deal.  But it should always be a big deal!

When I got that call from my agent saying my first book had sold, I went out with friends and celebrated by drinking scotch in a bar – it felt very writerly ;-)  And then I joined Sisters in Crime and Mystery Writers of America, because I knew nothing about being a writer, or about the publishing industry.  Both groups have served me VERY well over the years.

Parnell Hall is a hoot, and that video, while hilarious, is also painful!  I have had signings where no one showed up but the store employees – very embarrassing.  But then I learned that the shop owners often feel just as embarrassed, as though they should have been able to pull in an audience.  Now I just chalk up a low turn out to the weather or something similar, and as I usually bring a bottle of wine I enjoy a glass with the staff.  Another thing that helps is to travel with another author or two – that usually brings out a bigger crowd, and it’s a lot more fun! I haven’t had anything particularly unusual happen at a signing yet, though it’s most fun when a reading morphs into a sort of free-for-all, with people sharing their thoughts and opinions loudly and happily.

I think anything that keeps people reading is a good thing.  I’m not big on technology (friends reading this would laugh at this understatement!) but I know a lot of people love their various electronic devices – and that they allow the reader to adjust the print size and the contrast, and enable readers to travel with multiple books.  Those are all good things!  And as an author, I get paid a percentage whether readers buy paper or electronically.

Publishing directly as an e-book rather than through traditional publishers, however, is a whole other debate…it’s too complicated to go into it thoroughly here, but I think eventually there will be a lot of books available only by e-book, while others will be available in both paper and electronic formats.  And as I said above…as long as there are readers, I’m fine with it ;-)

Thanks so much for spending this time with us, Julie. It was fun to get to know you a bit better!