Night of the Living Deed by E.J. Copperman 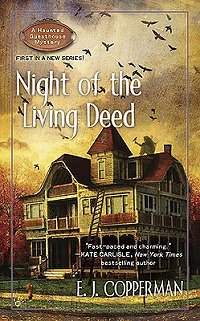 Newly divorced Alison Kerby has returned to the Jersey Shore to fulfill a dream: renovating a Victorian fixer-upper into a beautiful guesthouse. She figures she has the know-how and just enough money to complete the makeover and open for business so she can provide a decent future for Melissa, her nine-year-old daughter.

As she begins the process of renovating, she gets the odd vibe now and then but thinks nothing of it until a fifty-pound bucket of joint compound knocks her in the head, and she begins seeing ghosts. Two of them. One an evil-tempered young woman named Maxie (the previous owner of the house), and the other, a private eye named Paul. Both died in the house on the same night. Police think they "drank the Kool-aid" and committed suicide. Maxie and Paul insist that they were murdered-- and they also insist that Alison drop everything to find out who killed them.

It's quite a stretch for Alison to believe in the resident ghosts to begin with, but she finally has no alternative. Both ghosts are very good at getting their way, although they have very different methods. However, Alison's not bad at driving a hard bargain herself, and she manages to persuade them that she'll investigate as long as the renovations keep on schedule. As she begins to play sleuth, things begin to happen, and she realizes that she'd better identify the killer before she becomes the third ghost in her guesthouse. (And don't you dare call it a bed and breakfast!)

I was in the perfect mood for a light, fast-paced, and laugh-out-loud funny read. Night of the Living Deed almost immediately had me in reading nirvana. The cast of characters is superb. Alison's voice is pitch-perfect: alternately sarcastic, befuddled, DIY knowledgeable, stressed out, and punch-drunk... as only the mother of a young girl can be. Her daughter, Melissa is a nine-year-old prosecuting attorney who's the perfect sort of child to have live in a haunted house. Alison's mother, her friends, the police detective she runs to constantly, and the ghosts, Maxie and Paul, all add color, depth and humor to the story.

When I wasn't laughing or telling Alison to "Check there! Check there!", I was appreciating the fact that this mystery with the home renovation theme actually had quite a bit of DIY detail. Alison kept to her bargain and managed to wear her deerstalker cap while she refinished cabinets. So often in themed mystery series, the theme seems to be a thin veneer that's easily cast aside. Not so in this book, and that's refreshing.

I tired of Janet Evanovich's Stephanie Plum series long ago, and I've felt the lack of a truly funny mystery series in my reading life. No more-- and I have E.J. Copperman to thank for it!