The Koala of Death by Betty Webb 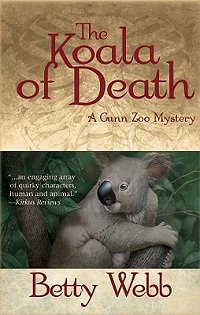 First Line: I awoke during a pearly dawn to hear something bump against the Merilee's hull.

Unfortunately that bump against the hull of Teddy Bentley's boat wasn't a wake-up call from the resident sea otter who comes for breakfast every morning. The bump turns out to be the body of Koala Kate, a fellow keeper at the Gunn Zoo and darling of Good Morning, San Sebastian's Koala Kate's Kuddly Kritters.

Having been a guest at a party aboard the Gutterball the night before, it is assumed that Kate drank too much, fell overboard and drowned, but the police soon disprove that notion. Kate was murdered. Before Teddy's detecting bones even have a chance to tingle, she's roped into filling in for Kate on the television station's animal spot because it's bringing in much needed good press for the zoo. But being on TV, avoiding her match-making mother, and filling in for Kate in the koala exhibit isn't enough to keep Teddy from doing her own investigating-- especially since she may be the next victim.

The list of suspects in this book is a long one: from keepers at the zoo to various "liveaboarders" at the marina to an animal psychic to Teddy's own mother, and Webb does a masterful job at keeping us guessing.

Teddy is a strong, feisty main character, and her stints on television are hilarious-- reminding me strongly of watching Joan Embery bring various critters to The Tonight Show with Johnny Carson. One of the things I appreciate the most about this Gunn Zoo series is that author Betty Webb can show off her skill with humor and satire.

She also imparts a lot of knowledge about wildlife, so if you like your mysteries seasoned with a bit of fur and maybe a fang or two, I would highly recommend this series. Do you have to start with the first, The Anteater of Death? No, this one works quite well on its own-- but I wouldn't deny myself the fun if I were you!