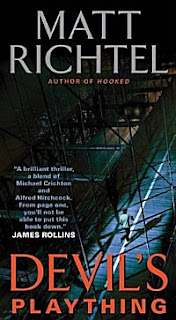 First Line: My big toe is exposed and my companion lost in the world beyond.

Nat Idle is a freelance writer spending most of his time writing blog posts with medical angles. He's got more on his mind than his next post, however. His beloved grandmother, Lane, now in a nursing home, has been having problems with her memory, but those problems have been snowballing. Nat doesn't want to accept the inevitable, and he vows to spend more time with her. He's in Golden Gate Park when he makes that promise, and minutes later he's almost gunned down.

It was no random attack, and as he pursues the truth through a warren of technology and paranoia, he learns that this may all be linked to something called the Human Memory Crusade-- something his grandmother has been participating in at the nursing home. Realizing that-- whether she knows it or not-- Lane holds the key to the mystery, Nat smuggles her out of the nursing home, and they go on the run to find the answers.

Although this is the second book in which the character of Nat Idle appears, it stands completely on its own. There were no annoying references to past events that made me wonder what had happened before.

My favorite character in the book was Nat's grandmother, Lane, but once she is taken away from him, the book almost completely loses its momentum. With the real threat gone, there are glimpses of the evil behind the Human Memory Crusade, but there is no real solution or an attempt at one in sight. The first half of the book was excellent; the last half limped home.