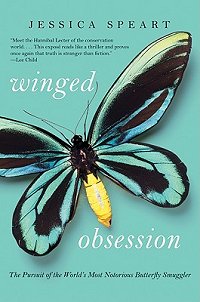 First Line: "Hey, what does your guy look like again?"

This book is the best of all possible worlds: non-fiction that is eye-opening, mind-blowing, and reads like the best fiction. It details rookie U.S. Fish and Wildlife Agent Ed Newcomer's three-year-long quest to nab Hisayoshi Kojima, the "one-man demolition derby" of butterfly collecting. The wily Japanese was an environmental nightmare, able to "acquire endangered butterflies that not even museums or university collections could obtain."

Perhaps it was the setting in which I chose to read this book-- outside in my back garden being able to watch butterflies floating from flower to flower-- that made it have such an impact on me. Something tells me that it was much more than that. Jessica Speart, author of a mystery series featuring U.S. Fish and Wildlife Agent Rachel Porter, is a freelance journalist specializing in wildlife enforcement issues. In her research for the book, she met and talked with Kojima several times-- almost succumbing to the man's charm herself.

She builds suspense chapter by chapter as she shares her knowledge of the U.S. Fish and Wildlife Service and the monumental obstacles it faces in an attempt to uphold the law and to protect wildlife. And if you think butterflies are unimportant bugs, think again. Smuggling them brings in millions of dollars of ill-gotten profits each year.

This is all vital information, but what really made me devour this book in one sitting  is the cat-and-mouse game played by Agent Ed Newcomer and smuggler Yoshi Kojima. Speart writes with knowledge and passion and makes both men live and breathe on the page. I felt every bit as invested in the outcome as the two "players" themselves.

It is my habit to mark passages in a book that have an impact on me in some way. As you can see in the photo to the right, Winged Obsession knocked my socks off. I am an avid member of Paperback Swap, and nowadays I swap 99.9% of the eligible books I read. No one's getting their hands on my copy of this book!

Learn More from an Indie Bookseller.