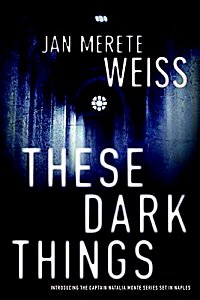 First Line: A large cypress tree arched over the graves, and a few clouds the color of peaches.

Captain Natalia Monte of the Italian Carabinieri may get to wear uniforms designed by Armani, but she's faced the same tough climb up the law enforcement ladder that all women have had to face. Monte works in the city in which she grew up-- Naples-- and Mt. Vesuvius with its varying colors of smoke plumes looms in the distance watching over all.

A beautiful young German college student has been murdered, her body carefully placed in the crypt beneath an ancient church. Monte has been assigned to investigate, but not only are there many suspects, she also finds her way hampered by the garbage strike that has deadlocked her beloved city with towering piles of stinking, rotting refuse.

The setting of this book is absolutely superb. I have seldom read a fiction book and come away having learned so much about a city. Weiss wove a Neapolitan spell around me using threads of beauty as well as ugliness when Monte's investigation takes her to the violent underbelly of the metropolitan area.

What didn't work so well for me were the plot and the characters. There were many plot threads, but the ending felt rushed and too neat for a place such as Naples. Monte's partner, Pino, was a more developed character than Monte, but they all felt "at a remove". The relationship between Monte and Pino took off too quickly, and I felt that it would have worked better if it had taken place over the span of a few books rather than all in the first. Just enough of Monte's backstory is given to make her interesting, and I'm hoping that more information will be forthcoming in future books. From the ending (which doesn't show her in the most flattering of lights), it appears that Monte will be a multi-faceted character who will grow and change.

Since I was absolutely riveted by the setting and culture of These Dark Things, I look forward to reading the next book in the series. I have high hopes that plotting and characterization will improve and match the city of Naples as a setting.